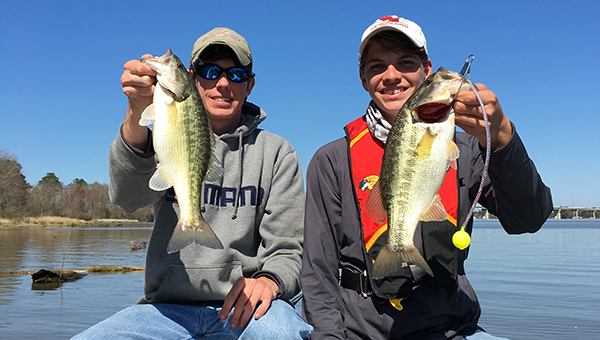 Courtesy photo
T.R. Miller seniors Will Smith (left) and Tylan McDonald formed the TRM Bass Club to compete in the B.A.S.S. Nation tounaments in the state.

Tylan McDonald and Will Smith are quite the fishermen. Matter of fact, they’re really good fishermen. As a team, the two are doing some remarkable things. Together the two T.R. Miller seniors formed their own fishing club, the T.R. Miller Bass Club, to compete in the B.A.S.S. High School series.

Recently, despite being newcomers to the B.A.S.S. Nation High School competitions, the duo placed 18 out of 154 boats to qualify for the state championships at Wheeler Lake.

Tylan’s dad, Scott McDonald, who serves as the club manager, said the experience traveling and competing against some of the cream of the crop in the country has been worthwhile.
“(The events) are definitely a lot bigger than what we thought they were going to be,” Mr. McDonald said. “But I think the boys are handling it very well. I think they are enjoying traveling and fishing and getting to talk and meet new people.”

“That’s the best part to me,” he said. “You learn a lot of new fishing stuff.” 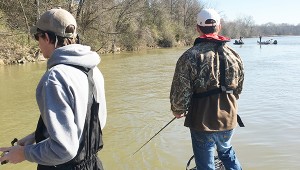 The love of fishing, a sport that call’s man’s intimateness with nature, has been the driving force of the team’s pursuit of glory. The idea of forming a fishing team was actually talked about a few years ago.

“We got started kind of late forming our team,” Smith said. “A lot of the teams in competition are affiliated and sponsored by their schools as clubs, but that’s not our case.”

“We went after it ourselves,” said Mr. McDonald. “We signed up, filled out all the paperwork and got to work.”

For support, the team relied on sponsors from the community to get involved.

In February, T.R. Miller Bass Club was in its first tournament at Lay Lake.

“The first qualifier was overwhelming,” said McDonald. “The second (tournament) we had a better idea of what to expect.”

Smith, who has been fishing most of his life, was entering his first bass tournament at Lay Lake.

“I was nervous that first tournament,” Smith said. “What really shocked me was to see how big the crowds were watching the weigh-ins. I thought it was just going to be the people in the tournament. The amount of spectators that come out I had no clue.”

Despite the nerves, the team had a good outing to qualify to the third qualifier at Miller’s Ferry in Roland Cooper State Park where they placed 18th.

“We knew Miller’s Ferry a little bit better because we fished it before,” Smith said.

“It was tough fishing conditions at Miller’s Ferry,” McDonald said. “It was almost at flood stage at 60 feet. Everybody had a rough time.”

They will next compete April 16 in Guntersville, a place that has been a major draw for anglers. 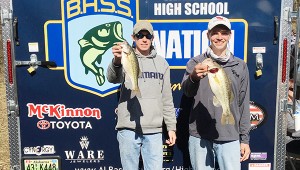 Courtesy photo
Will Smith (left) and Tylan McDonald show off their catch.

“(Guntersville) is such a fishing city,” Mr. McDonald said. “I expect a lot of national teams there. I believe some of the pros will be there also.”

It’s some of the pros that McDonald and Smith model their fishing style after.

“I like Gerald Swindle,” McDonald said. “ Mainly because he lives in Alabama. I think he’s hilarious.”

Smith said he admires pro angler Greg Hackney because of the relation in personality and fishing style.

“Some people like to fish out deep in the middle of the lake where its all stacked up, but (Hackney) likes to go near the bank where there’s those falling down tree branches and grass in the water and lily pads. He believes that’s where the fish are going to be. I like to fish that way too.”

The TRM Bass Club faces competition with some odds not stacked in its favor. Added with the club’s lack of experience, most schools have two or three clubs in representation. Bigger high schools with fishing programs like Hillcrest High School out of Tuscaloosa, Ala. had six teams competing at Miller’s Ferry. No matter the obstacles TRM Bass Club sees great opportunities ahead.

“I like to see where I stand versus everybody else in the state of Alabama,” Smith said. “I’d love to make it on a college team and if we do well, that pretty much shows we got what it takes to make it to the next level.”

Mr. McDonald also expressed how the experience could create opportunities for the future.

“This experience puts them out there,” Mr. McDonald said. “It’s something they can have on their transcripts to go to college. They’re putting in the work.”

With doors opening, and success on the horizon, McDonald and Smith speak of kids just loving to fish.

“I love the competition,” McDonald said. “I like the excitement of catching a lot of fish and bringing them up to show them off. (Fishing) is a good past time.”

“Fishing takes time and patience,” Smith said. “That’s the good thing about it. You fish enough you just know. It’s instinctual. In the end, whether you catch a fish or don’t, it’s just fun being out there.”

The TRM Bass Club is open for sponsorships.