Tigers maul the Bobcats with sweep

The T.R. Miller Tigers finished a sweep of area rival Opp this past Wednesday in Opp. The Tigers defeated Opp the day prior at home, 5-4, in extra innings. In game one of Wednesday’s matchup, Miller won 13-1 and game two 9-1.

In a game that lacked timely hitting but was plentiful in sloppy defensive play from both teams, the TRM Tigers defeated Opp in 12 innings, 5-4, to remain undefeated in the area.

The Tigers loaded the bases in the bottom of the 12th inning. The Opp pitcher worked the count to 3-2 to Miller first baseman Russell Smith after falling behind in the count 2-0. Opp delivered the pitch that hit Smith, sending him to first base and bringing home the winning run for Miller.

Tripp Floyd led the Tigers with three hits. Jake Najor and Joshua Winton each had a hit and two RBIs.

Floyd got the start on the mound for Miller, pitching seven innings and striking out eight batters. Caleb Winton came in for two innings of relief behind Floyd. Stokes Jennings closed the game out and picked up the win.

Miller committed 10 errors in the field.

After both teams failed to score in the opening inning, Miller got in the score column in the second inning off some timely hits and sloppy play by Opp. Senior Tripp Floyd connected for an RBI single to the outfield. A few pitches later the Tigers scored off a balk called on the Opp pitcher. Left-fielder Jordan Williams padded the Tiger lead with an RBI single to increase the lead 3-0. A pitch got away from the Opp catcher to score another run for Miller. Catcher Hunter Brittain then singled home a run to make the score 6-0.

Miller added a run in the third inning and another run in the fourth inning off a single by Jake Najor.

Up 8-0, the Tigers decided to put the game away with five runs in the fifth inning off another Opp balk, a pass ball and a two-run homer to left field by third basemen Jason Konsler. 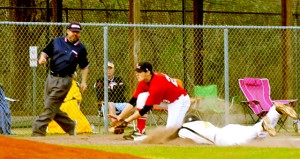 Opp scored its first, and only run, in the bottom of the inning.

Booker received the win on the mound, throwing the complete game, allowing two hits with 10 strikeouts.

With the win the Tigers clinched its third straight region championship crown.

Miller started off the game with a bang with a two-run homerun by Hunter Brittain.

In the second inning the Tigers added three runs with a two-run single to right field by O’Neil White and RBI single by JoJo Booker.

In the fourth inning, Booker drove in another run with a single to left field. A walk with the bases loaded increased the Tiger lead, 7-0.

Opp answered in the bottom of the inning with an RBI single by Alex Wise.

In the top of the fifth inning, Tripp Floyd connected for a double down the third base line to score two runs for Miller. 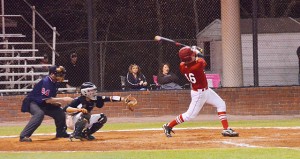 Corey Williams | The Brewton Standard
Floyd smacks a hit down the third base line.

Opp added another run in the seventh inning.

White was 4-for-5 at the plate with two RBIs. Booker went 2-for-5 with an RBI. Brittain went 1-for-3 with a homerun and three RBIs. Floyd was 1-for-4 with two RBIs.

Joshua Winton threw the complete game for the Tigers, allowing one run on five hits with nine strikeouts.