Arrangments made for Flomaton student 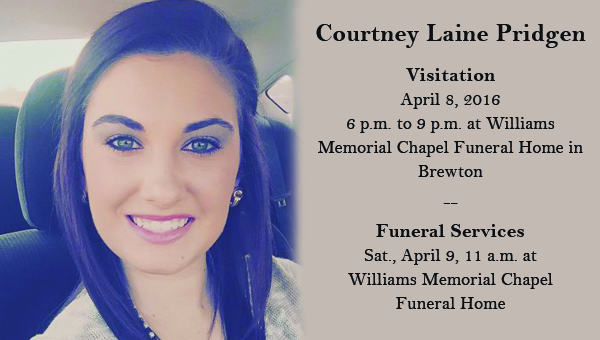 * Editor’s note: This is an updated version of “1 life flighted after Tuesday Crash” to reflect the passing of the crash victim.

Arrangements for  Flomaton High School student Courtney Pridgen have been made.Visitation will be held tonight, April 8, 2016, from 6 p.m. until 9 p.m. at Williams Memorial Chapel Funeral Home in Brewton.

Funeral services are scheduled for Saturday morning, April 9, at 11 a.m., at Williams Memorial Chapel Funeral Home with the Rev. Nicholas Jones officiating. Interment will follow in Sardis Cemetery in Flomaton.

Pridgen was involved in a two-vehicle accident on Ala. Hwy. 31 in front of Southern Pine at approximately 1:30 p.m. on Tuesday. Vehicles involved were a gold Jeep Liberty and Ford minivan.

Sources identified the driver of the Liberty as 17-year-old Pridgen of Flomaton.

Sgt. Patrick Caylor of the Brewton Police said the teen was air lifted to a Mobile hospital.

Occupants of the minivan were transported to D.W. McMillan Hospital and treated for non-life threatening injuries.

Caylor asked any witness not previously interviewed by police to contact the department at 867.3414.

The Brewton Standard will continue to update this story once more details are made available.