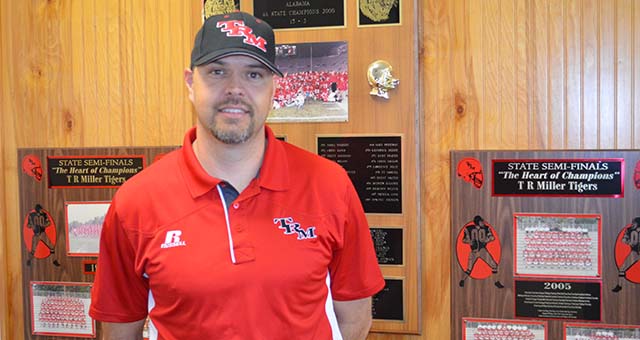 T.R. Miller head coach and athletic director Andrew Thomas knows he has some big shoes to fill. But the two-time state champion feels the pedigree of being a T.R. Miller Tiger isn’t that different from his own philosophy.

“The biggest thing to bring is my energy and style,” Thomas said. “I’m fairly similar to the culture that’s already here. I believe being hard-nosed, being physical and being tough.”

Thomas said right now he is in the process of meeting the coaches and getting to know the players.

“It’s going to be a process schematically where we’re going to go,” Thomas said. “I need to get a feel of the kids and see where we are. I’m hoping by May to start working where we might go as a team.”

Thomas said one of his biggest focuses now is weight room training, which he feels will set the tone for the team come summer workouts and into the Fall.

“We had a coaches meeting this past weekend,” Thomas said. “The focus is where we want to go with our weight room training. I believe in doing things fast with tempo, even in the weight room. The good thing I’m stepping into is these kids are use to working. They’re use to structure.”

At Trenton, Thomas said the team ran more of a wing base offensive scheme, which gave the offense multiple options.

“For the most part offensively, I’ve been more different, more of a wing base and option; running Wing T with multiple plays out of it,” Thomas said. “And we got a lot of Pro I stuff out of it too. But really if you break it down to the fundamentals of what we did, its very similar to what’s been done here already.”

As the athletic director, Thomas said he looks forward to being supportive of all Miller sports.

“I’ve been a head coach or assistant coach in basketball, baseball, softball and track in the past,” he said. “I understand the schematics and preparation in different areas. But I still got a lot of learning to do as far as Alabama procedures. I want to come in and be as supportive as I can.”

Thomas graduated from Florida State University in 2000. He began his coaching career at Newberry High School near Gainsville, Fla. He spent nine years at Dixie County High School, his alma mater. In the 2010 season he served as assistant football coach at Chiefland High School, before serving five seasons with Trenton High School.

“I got to be me,” Thomas said. “I’m not coming here to flip everything in a week. That’s not what we’re doing here. It’s a gradual process of learning personnel and going from there.”