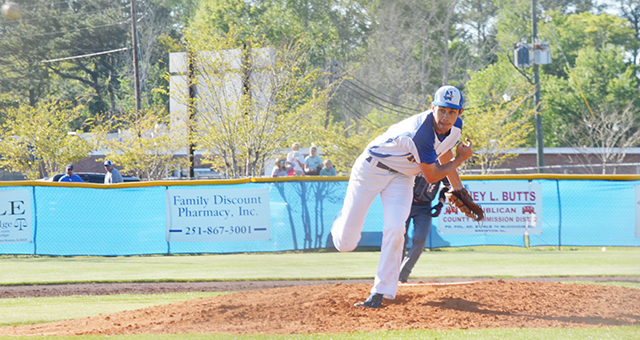 Corey Williams | The Brewton Standard
Neal’s Lane Chavers throws off the mound against Satsuma. Chavers pitched five innings, striking out four batters for the win on the mound.

Behind some stellar pitching by Lane Chavers and Dalton Shell, the W.S. Neal Eagles defeated Satsuma on Friday, 4-1 to clinch a playoff berth.

Neal added another run in the third inning off an error by Satsuma on the infield.

Satsuma manufactured a run in the fourth inning off a squeeze bunt, to make the score 2-1 in favor of Neal.

Neal added a run in the fifth inning to extend the lead 3-1.

In the bottom of the sixth, Shell got things going for Neal with a single. What to follow was a base running clinic when Shell easily stole second base and advanced to third on a defensive indifference. A balk on the Satsuma pitcher eventually scored Shell from third base to give Neal the insurance run it needed to bring home the victory.

Neal head coach Coy Campbell said his team is playing some good baseball down the stretch of the season.

“Our guys, (Chavers) and (Shell) threw strikes and gave us a chance for the win,” Campbell said. “We picked up that read with the fourth run in the sixth which was a big run. (Jacobey Hawthorne) has been hot for us lately, but had no hits today. Still we have different players stepping up for us when we need it. All coaches preach every year you want to be hot at the end of the season. Our guys are buying into it and doing what it takes to win.”

Shell went 2-for-3 with an RBI at the plate to lead Neal. Chavers and Malcolm Hawthorne each had a hit.

Chavers picked up the win on the mound, pitching five innings, allowing one run on two hits, two walks and four strikeouts.

Shell came in for relief in the sixth inning and gave up two hits, a walk, and struck out three batters.