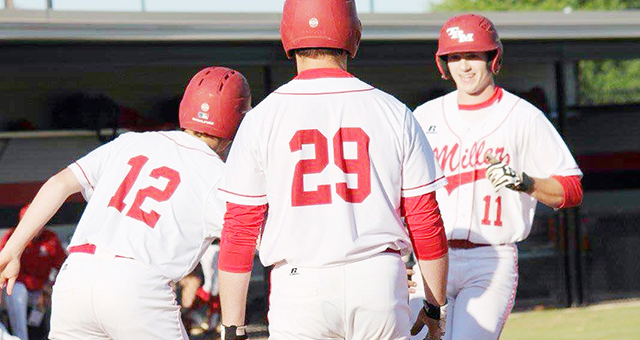 Courtesy photo
No. 11 Caleb Winton touches homeplate after his homerun against Saraland in the fourth inning.

The Tigers split a doubleheader against 6A region Saraland on Friday and No. 1 ranked 4A region UMS-Wright on Saturday to move its record to 20-7 overall for the season.

It was a big inning in the bottom of the fourth, where Miller found itself down 4-0. To get things going Caleb Winton belted a two-run homerun over the centerfield fence. Later in the inning Joshua Winton hit a sac fly to score a run.

An error at shortstop by Saraland tied the game 4-4. The Tigers finally took the lead on a two-run single by Hunter Brittain.

Saraland answered with a three-run fifth inning to retake the lead 7-6.

Miller added a run in the sixth inning off an infield error by Saraland to tie the game 7-7.

In the bottom of the seventh with the bases loaded, Miller’s Russell Smith worked the count for a walk to bring the winning run to the plate.

Smith got the win on the mound, allowing one hit in one inning of relief. Caleb Winton started the game.

Saraland held the Tigers to just one hit.

Joshua Winton pitched the complete game and picked up the loss. Winton gave up four hits, while walking four batters and striking out nine.

UMS-Wright jumped out ahead early with two runs in the first inning. The Tigers answered with a run at the top of the second inning and a big four-run inning in the fourth to seal the win.

Joshua Winton and Caleb Winton were both 2-for-3 with a double and two RBIs. Jason Konsler had two hits.

JoJo Booker picked up the win from the mound, pitching a complete game. Booker surrendered two runs on two hits, with 10 strikeouts. The game marked Booker’s fourth complete game and fourth double-digit strikeout game this season. Booker is 7-1 on the mound this season. 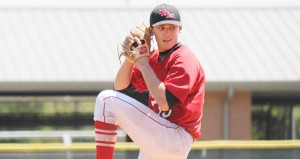 Photo by Christina Booker
Booker throws off the mound. Booker struck out 10 batters in the Tigers win over UMS-Wright.

Miller struggled for offense in game two, with the lone hits coming from O’neil White and Jason Konsler.

Jo Jo Booker had an RBI in the game.