Show opens Friday, will continue through May

Another of Brewton’s own has joined the cast of “To Kill A Mockingbird.”

For years, the play of Monroeville’s Pulitzer Prize winning novelist, the late Harper Lee, has drawn talent from its geographical neighbor, and this year is no different. Brewton’s young Caroline Williamson began her acting career last year as “Scout,” and it is a role she is again assuming this year.

Baxter, the 13-year-old son of Angel and Chris Baxter, is a seventh grader at Brewton Middle School.

He said Monday that he was thrilled to “finally” be chosen for a role in the world-renowned play. 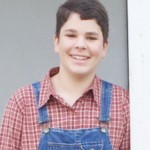 “A couple of years ago, Judge (Dave) Jordan came up to me and said I was great for the role of ‘Dill,’” Baxter said. “I tried out, but didn’t make it. Then, the next year, I tried out for ‘Jem.’

“I got the call in November saying I got the part,” he said. “It was great.”

Baxter said the role is a bit time consuming, but very rewarding.

“We started meeting twice a week in February and have worked very hard since then,” he said.

While Baxter said he doesn’t have a “big history” of acting, he used his relationship with sister and T.R. Miller junior, Payton, as inspiration of the role of “Jem.”

“The thing about acting is that it is fun to be someone else,” he said. “Jem is this character that’s going through a really hard time with his family because people in Maycomb don’t believe it’s a good thing that his dad, Atticus, is doing.

“He has his sister Scout who is going through some hard things too,” Baxter said. “Jem’s able to help Scout and Scout’s able to help him – it’s kind of like me and Payton.”

As an added benefit to the role, Baxter and Williamson were able to perform for their fellow BMS students Tuesday. The group, which represented the 100 top readers at BMS, attended the performance thanks, in part, to the generosity of the Brewton Council of the Arts.

The play will open Friday with performances set every Friday and Saturday at 7 p.m. through May 21. A very limited number of tickets remain available at tokillamockingbird.com. Tickets are $50 each, with the exception of the April 23 show, which are $75 each and include a party on the courthouse lawn.

Other locals participating in the production include Connie Baggett and Hermine Downing of Brewton and Billy Garner of Castleberry.

FPD gets $10K grant for radios