Davis soars to next level 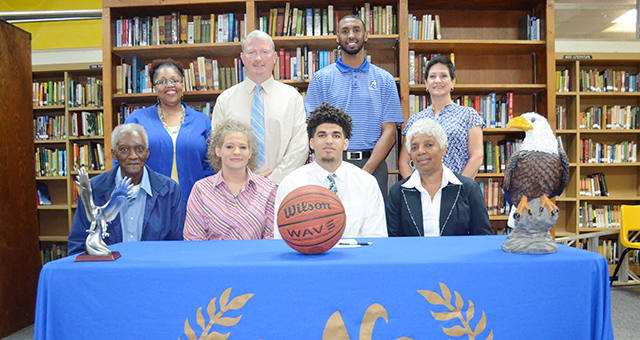 W.S. Neal senior Tyshawn Davis will take his basketball talents to the next level to play for Alabama Southern.

Standing at 6 foot 8 inches, Davis averaged a near clip of 19 points, seven rebounds, three assists and two blocks per game this past season for Neal.

Alabama Southern head basketball coach Trent Eager said he’s been watching Davis since his tenth grade year and feels with his size and abilities he can play point guard at the next level.

“I see (Davis) playing the point for us with his court vision and I.Q. of the game,” Eager said. “I see him definitely coming in and making an impact. He can stretch the defense by making shots and he definitely can lead a team. Those are some qualities he’s done (at W.S. Neal) and that I look for him to come in and do for us. With his size and abilities I feel like he’s going to be really special.”

Neal head basketball coach Dewan Salter spoke highly of Davis’ ability on the court, particularly his ability to be a leader.

“He’s a great young man, very respectful and is a team leader,” Salter said. “The last two years I’ve coached him he’s helped carry the team with his leadership. He has great ability and is still growing. I’m looking for great things from him in the future.”

Davis started in all 29 games this past season for Neal, and recorded at least 20 points or better in 10 games. He posted three double-doubles and had a season high 34 points against UMS-Wright on Jan. 12.

Davis said he wants to continue to get better to become a complete ballplayer.

“Basically I want to do everything I possibly can to improve as a player not just physically but mentally,” Davis said. “I want to know the game better, make better decisions on the floor. And just win. I want to do whatever I can to get the team a win.”

Davis’ mother Christy Williams said she is very proud of her son.

“It’s great to see him fulfill his dreams,” Ms. Williams said. “He gets to go to school and gets to do it his way with playing ball. It feels good for me to know that he’s worked hard and he’s where he is at this point because he gave it his all and never gave up. It feels wonderful.”

Davis said he has a lot to be thankful for and is very appreciative for the support system he’s had throughout the years.

Davis said he plans to study radiology to become an X-ray technician.