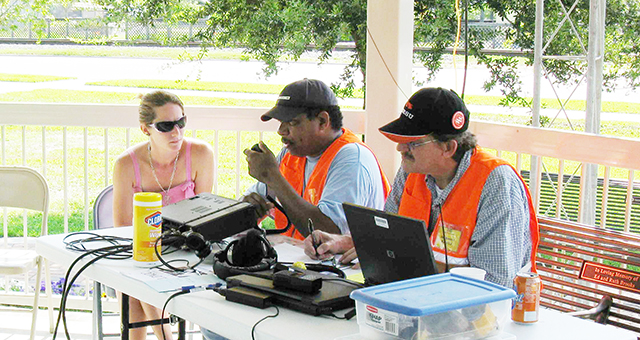 Those wondering how communication works in times of natural disaster or other emergencies can get an up-close demonstration Saturday.

The Brewton Amateur Radio Union will host “Ham in the Park” beginning at 8 a.m. in the Brewton City Park and demonstrate how radios work until noon.

“Did you ever have a neighbor or relative who was a ham operator?” asked board president Thomas Knotts. “You may remember these folks tinkering with glowing, tube-type radios and ‘talking’ with dots and dashes.

“Today there are so many new technologies available allowing direct keyboard-to-keyboard communications, television, and even communication via satellite,” he said. “While Morse code is still used by many, it is no longer a requirement for becoming a ham.”

Knotts said hams communicate locally and worldwide using a range of radio bands and modes of communication, he said.

“In the days of smart phones and the Internet, you may be surprised to learn that the Amateur Radio Service plays a very important role in emergency communications,” he said. “If a disaster causes the normal communications infrastructure to fail, ham operators can immediately deploy portable equipment using emergency power and simple antennas to communicate with officials outside the disaster area; even sending emails without having Internet access.”

Also, in contributing to the advancement of the radio art, hams have devised new forms of digital communications, combining computers with radio transmitters to communicate with modes that take up less space with greater efficiency.

“So, mark your calendars and drop by to see ham radio in action,” Knotts said. “You may find that today’s amateur radio has something to offer you.”