Mekhia Willams of T.R. Miller and KeKe Floyd of W.S. Neal have been opponents on the court for a couple years representing their respective schools; but soon that will change. On Thursday, both playmaking guards signed on the dotted line to play for the Faulkner State Lady Chiefs basketball team.

Faulkner State head coach Linda Pitts, who is no stranger in recruiting from the area, said both Williams and Floyd are big time scorers.

Williams is coming off a season in which she averaged 17 points, 4 rebounds and 5 assists. She scored a season high 34 points on Dec. 31 against Dothan.

TRM girls head basketball coach Ron Jackson said Williams is very disciplined and has worked hard over the years to develop into a good ballplayer..

“She’s been playing since ninth grade” Jackson said. “The last two years she really came around to develop into an exceptional guard, and one of the better guards we’ve had in a very long time. I think she’ll make a good college player.”

Williams said she got a chance to practice with Faulkner State and really enjoyed her visit.

“(Faulkner State) was welcoming and I liked that,” Williams said.

Williams said the next step in her game is to become a better ball handler and making smarter decisions with the ball. Coach Pitts agreed.

“That just comes with everyday practice and learning the game. She’ll be okay.

Williams said she’d like to thank Coach Jackson, her mom and her granny. She would also like to thank assistant coach Gerald Barton who was instrumental in developing after her ninth grade year.

“In the ninth grade I scored maybe ten points the whole basketball season,” Williams said. “I was at the (Brewton YMCA) everyday with Coach Barton. He was helping me in the tenth grade and I think I scored 22 points that first game. “

Williams said she is interested in pursuing a degree in special education.

Floyd is coming off a senior season with Neal where she averaged 20 points, seven rebounds and a near three steals per game.

Neal girls’ head basketball coach Dewan Salter said Floyd is a well-rounded student and looks for great things from his former star player in the future.

“She’s going to be truly missed next year,” Salter said. “She was a valuable part of the team. Faulkner State is getting a top-notch player and individual. I’m excited for her, and her family for this opportunity. I think the world of her and her family. Her family has done a really good job with her.”

Floyd’s mom Monica Fountain said she is very proud of her daughter.

“She’s worked very hard. She’s put in long hours. There’s been nights where she’s at practice and stayed up to 12 o’clock studying to try to get it all in. It’s very rewarding, I’m very proud.”

Her father, Kevin Rudolph, expressed his joy in seeing his daughter grow and excel.

“It’s just amazing,” Rudolph said. “I’m grateful her mother has been a big part of her life. I stay out of town, and by the grace of God, she has done an outstanding job with her. I’m more than proud. Always have been. She’s just steady climbing and getting better and better.”

Floyd said she is very fortunate for her support system.

“I’d like to thank Coach Pitts, Coach Salter, my mom, dad and entire family for their support,” Floyd said.

Floyd said she wants to improve on her scoring at the next level.

Floyd said she is interested in studying physical therapy. 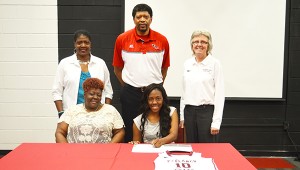 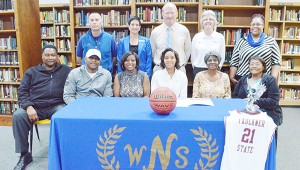