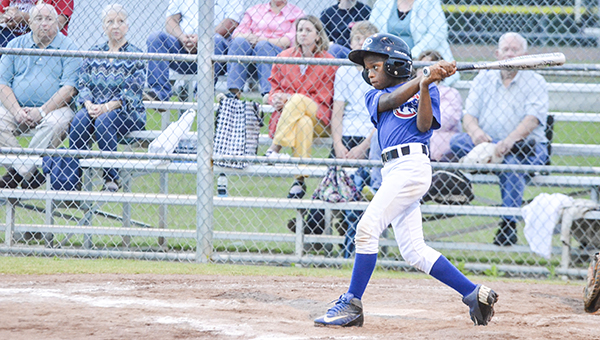 Corey Williams | The Brewton Standard
The Cubs E.J. Kelly puts a swing on a pitch.

Baseball and softball were in action this past week with 10U East Brewton boys and interleague matchups in 12U girls’ softball and 12U boy’s baseball. Here are the games thru April 21.

Walks and timely hitting by the Cubs hampered the Marlins chances of competing against the Cubs. Cubs pitcher Collin Nelson pitched a gem from the mound, striking out eight batters while allowing three runs on one hit.

Soloman Crapp led the Cubs on offense with a single and two runs.

Easton Grace suffered the loss on the mound; allowing 10 runs on seven walks and six strikeouts. Grace only surrendered one hit.

C.J. Gibson got the lone hit for the Marlins.

Amazing offense and a combined no hitter on the mound by Ed Dolihite and Kanan Carter propelled the Reds to a one sided 16-0 victory.

Dolihite and Carter each struck out three batters and walked one.

Miller Hart was 4-for-4 with a double to lead the Reds. Kyle Blevins had three hits and scored four runs. Kanan Carter and Dolihite each had three hits.

The Reds had a combined 16 hits for the game.

Logan Rowell dazzled from the mound for the Pirates, striking out nine batters. Meanwhile the Pirates offense was cooking.

Hoomes led the Yankees with a hit. Jordan Tolin scored a run.

Timely hitting, including two triples by Ashli Wyatt and Madison White propelled Columbia Blue in a win over Lady Gold.

Johnson, Taylor Reeves and Kendall Johnson had a hit for Lady Gold.

The Express accumulated seven hits as a team versus the Redwings’ five hits in the win.

Colton Cain was 2-for-2 with a run. Parker Booker, Chase Fountain, Tallen Clark and Kingsley Williams each had a hit.

Luke Brown and Hunter Strickland were both 2-for-2 with two singles.

It was a shootout game between the Fireballs and Lady Royals. Makayla Mitchell and Courtland Salter combined for the win at pitcher for the Fireballs. Salter was 3-for-3 at the plate, including a double, and scored two runs.

Jailyn Bondurant was 2-for-4 with two runs scored for the Lady Royals.

Ally Sheffield, Savannah Jacoy, Karrie Cuts all scored runs for the Lady Gray in the win. Kadence Woods and Kiera Jackson each had a double for the Lady Black. Wood scored the lone run.

Weston Hoomes, Noah Elliot and Adam Mendibles all were 2-for-2 at the plate for the Scrappers. Hoomes and Davion Polite each had a double.

Jonah Winton led the Tigers at the plate with two hits. Each team was flawless in the field, committing no errors.

The Scrappers won the hit battle at the plate, but the Rattlers came away with the win in a closely contested game.

Zane and Tyler Kirk were both 2-for-3 at the plate and scored two runs for the Rattlers.

Weston Hoomes was 2-for-2 with a double and two runs scored to lead the Scrappers.

Despite the high run total from both teams, there were only three hits in the game.

Aliyah Holder was 1-for-1 at the plate for the Lady Orange.

Rebekah Rowell and Abbie Heath were 1-for-2 for the Bandits. Rowell scored two runs.

Demiyah Floyd picked up the win on the mound for the Lady Orange. Floyd gave up six runs, on two hits, seven walks and two strikeouts. Abbie Heath and Layla Carter pitched for the Bandits and combined to strike out five batters.

Jay Fillmore and John Wesley Sessions combined for the win on the mound for Brewton. Both had two strikeouts in the game.

K.J. Jenkins, Justin Buckhault and C.J. Gibson had a hit for the Marlins. Cohen Zigler had a double.

John Sessions led Brewton at the plate going 2-for-2 with a double and triple.

Kinsley Byrd and Peyton Myrick combined for a no-hitter from the circle, leading the Velocity to victory.

Madison Douglas pitched for the Lady Blue and walked seven batters, while striking out seven.

Erica Howell led the Velocity at the plate with two hits, including a double.

It was a back and forth high scoring interleague game between the Silver and Legends.

Courtney Campbell went 3-for-3 at the plate for the Silver. Jade Godbolt had a hit and scored a run. Tori Barksdale scored three runs.

Anderson and Brianna Braun each had a hit for the Legends. Serenity Mitchell and Shawna Drakeford each scored three runs.

Nathan Pate put on his Superman cape, coming through in the clutch with a walk off single with two outs to secure the Yankees second win of the season.

Jordan Crane picked up the win on the mound, striking out nine batters and allowing only one hit.

Crane and Pate each had two hits for the Yankees. Walker Hoomes had a hit and two stolen bases. Cole Dristkell had a hit.

Prior to the game-winning hit by Pate, the Yankees were able to load the bases against Ranger’s pitcher Jordan Sims.

Tyler Brooks, Jordan Sims, Gavin Rose and Konnor Wood each had a hit for the Rangers.