Sexual assault in this country is of great concern, and to show its support in bringing awareness to the issue, Jefferson Davis Community College turned teal last week.

Statistics show that an estimated 20 to 25 percent of females will be the victims of rape or attempted rape on college campuses each year. The victims of sexual assault need to know that they are not alone.

With April being “Sexual Assault Awareness Month,” JDCC is committed to supporting efforts to bring awareness to sexual assault.

On Mon., April 11, “Project Clothesline” T-shirts provided by the JDCC Art Club were put on display on both the Atmore and Brewton campuses and will remain until the end of the month.  Project Clothesline was developed to bring awareness to sexual assault. 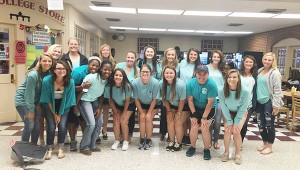 Wednesday, April 13, was “Wear Teal” day on both campuses.  Students, faculty and staff wore teal, which is the color that represents sexual assault awareness month.  In addition, both campuses had a representative from The Lighthouse in Mobile – Monica Townser in Atmore and Heather Cook in Brewton – to discuss the importance of Sexual Assault Awareness.  Students on the Brewton campus were treated to a free lunch by Lisa McMillan.

In conjunction with the event, JDCC is participating in the Monument Quilt Project which is designed to give the victims and supporters a voice.

The focus is to complete two 4’ x 4’ quilt squares in support of victims during the month of April.  The completed squares will be sent in and displayed with other squares from across the country.  For more information about the Monument Quilt Project, please visit https://themonumentquilt.org/about/.