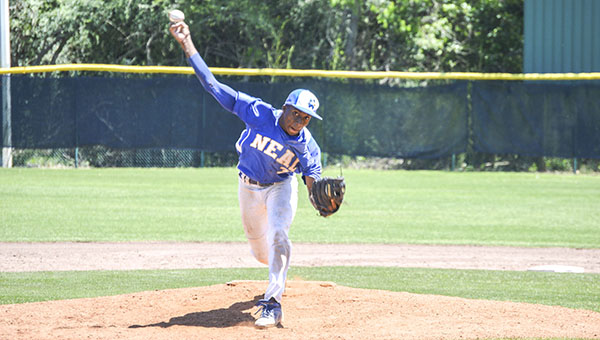 W.S. Neal fell just short of a comeback win against the Andalusia Bulldogs on Saturday, falling 8-9, in the last game of a best-of-three series in the first round of the 4A state playoffs.

Neal rallied from a 6-2 deficit in the fourth inning, scoring three runs to pull within one. Andalusia responded with a run at the top of the fifth inning. The Bulldogs added two more runs in the sixth on a triple by Will Jones and single by Chandler Jones.

Neal matched the Bulldogs in the bottom of the inning with two runs of its own on a single by Dakota Graves.

Neal pitcher Jacobey Hawthorne shutdown the Bulldogs in the seventh.

With two outs, bases loaded, Neal down 7-9, Malcolm Hawthorne connected for an infield single to draw the Eagles within one run.

The next batter, Derrick Barton found himself in a 2-2 count. Bulldog pitcher Nathan Langley was able to get Barton to groundout to third base to end the game.

Neal head coach Coy Campbell said his team fell behind early, making it tough to comeback late in the game. “We had opportunities,” Campbell said. “Probably didn’t play our best defense, but that being said we had 35 hits in three games, which is the best we’ve done all season. The game just didn’t work out in our favor. Our pitchers pitched well enough to win. Lane (Chavers) didn’t do too good in game one but came back ready to pitch the next day. I’m proud of how all the guys played. We’re going to miss the seniors. They have been a big part of our success and have been a pleasure to coach these past years. As coaches its time get started for next year.”

Will Jones and Riley Graham led the Bulldogs with two hits. Will Clark and Chase Hopkins each had two RBIs.

Clay Stephens got the start for the Bulldogs, pitching 3.2 innings, allowing five earned runs, on three walks and two strikeouts. Chase Hopkins came in for relief in the third and picked up the win. Langley closed out the game pitching three innings, allowing three runs and striking out four batters.

Andalusia will advance to the second round to play UMS-Wright.

Offense was aplenty for both teams. Andalusia came out hot, accumulating seven runs in the first three innings.

Neal finally broke into the score column when Matt Hutchins connected for a single to centerfield.

Down 10-1 going into the sixth, Neal began to click on offense. Malcolm Hawthorne led the inning off with a hit. Hawthorne eventually scored on a pass ball. Derrick Barton later scored on a sac fly by Hutchins. A single by Jared Cooper plated another run for Neal.

Andalusia added a run in the bottom of the inning to lead 11-6.

Neal responded with a rally in the seventh inning. After Neal scored two runs earlier in the inning, Cooper doubled to left field to score another run. A misplay by Andalusia brought in another run for Neal to make the score 11-10. Andalusia finally stopped the Neal rally on a fielder’s choice to end the game.

Cooper was 3-for-4 with three RBIs to lead Neal at the plate. Hutchins and Dakota Graves each had two hits.

Lane Chavers suffered the loss on the mound allowing seven runs, five earned, on nine hits, a walk and one strikeout.

Ethan Wilson picked up the win on the mound, allowing six runs, four earned, on seven hits, one walk and seven strikeouts.

With the game tied 2-2 in the fifth inning, Neal got its offensive game back on track. Neal scored on an error to take a 3-2 lead. Another run scored later in the inning to make the score 4-2.

RBI singles from Matt Hutchins and Jared Cooper would give Neal a 6-2 lead. Two more runs crossed the plate before the end of the inning to give Neal an 8-2 lead.

Andalusia responded with two runs off an error, then a single by Garrett Davis.

In the bottom of the sixth inning Dakota Graves hit a sac fly to the outfield to bring in a run, making the score 9-4.

Cooper held Andalusia scoreless in the seventh to get the win for Neal. Cooper pitched the complete game, allowing four hits, six walks and striking out seven.

Miller has good showing in meet