He was ‘every parent’s dream’

Everywhere she looks, she’s reminded of the amazing, joyful boy that holds her heart – the four-wheeler in the garage, the bananas in the grocery store and the children each morning as they walk across the spot where the Spencer family’s life changed forever.

For Bobbie Spencer, each day is a struggle to find peace after her grandson, Devon, was killed by a hit-and-run driver February as he and a friend walked to W.S. Neal Middle School.

Miss Williams faces four felony charges including manslaughter, while Mrs. Williams is charged with failure to report an accident with injuries. Reports indicate the teen failed to stop and report the accident where she allegedly struck both the WSNMS seventh grader and an unidentified boy that morning. Her mother was charged after she allegedly told her daughter to continue onto school after the crash. 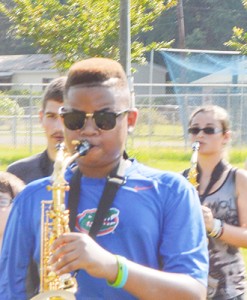 On Tuesday, the relief Spencer feels about the arrests was overshadowed only by the sweetness of memories and feelings of love she felt for “her boy,” Devon.

“Every day without him is just as hard as it was yesterday,” Spencer said. “And that’s been one of the hardest parts. We’ve been trying to grieve, trying to get justice because Devon can’t die like that – for nothing to happen and no one to be held accountable.

“I don’t want (Miss Williams) to go to jail for years on end, but she has to pay for what she’s done,” Spencer said.

“We’re lost,” she said. “We know that her family is losing too, and we’re not being vindictive or out to get them. The law is the law. They have to be held accountable.”

Officially, Spencer and her late husband, Melvin, were Devon’s grandparents. Born to the Spencers’ son, Brian, the couple assumed care of Devon when he was eight weeks old – an act that earned them the titles of “Mommy” and “Poppy.”

“Devon’s parents were so young when he was born,” Spencer said. “We sat them down and said, ‘Let us raise him. You’re too young.’ And they did.

“He was our baby,” she said. He slept right there between us.”

As the years went by, the family – including Devon’s biological parents – worked to mold Devon into a person who saw the best in everyone, Spencer said.

“He was the kid parents dream of having,” she said. “I can’t believe he’s gone.”

In the days following the crash, the public learned of Devon’s goodwill as he reportedly was carrying a pair of shoes he planned to give to a student who was being bullied for not “having stuff like we do.”

“That story was absolutely true,” Spencer said. “We tried to raise him to think of others, and he did. He had such a big heart. He was the ‘it’ in our family. He was going to be someone some day – that’s what he said.”

Children may dream of becoming doctors or lawyers, but not Devon.

“He wanted to be a Supreme Court justice,” Spencer said. “’I’m going to help make the rules, Mommy,’ he said. I would tell him all the time you can do it; you can do anything you want to.”

As a football and band standout, Devon had already begun his “political career” of sorts, chosen as 4-H president in sixth grade and then as the seventh grade student government representative.

For the last 35 years, Spencer has worked as an operating room nurse at D.W. McMillan hospital. After the death of her husband five years ago, she and Devon began staying with her son at the East Brewton apartment complex down from the middle school so she could easily answer emergency calls at the hospital.

That day, Feb. 11, was supposed to be a joyful one, after all it was her birthday, Spencer said.

She started the morningby calling to make sure Devon had lunch money for the week. She and other hospital staff were readying for the day’s surgeries. A short time later, the call came announcing the impending trauma patient’s arrival by ambulance.

Then, her phone rang.

“I just remember, ‘It’s Devon. He’s been hit by a car,’” Spencer said. “I looked around and there were my people, right beside me. Everyone I could have asked for, right there.”

A mad dash to the emergency room revealed the devastating extent of Devon’s injuries.

Transferred to a Pensacola, Fla., trauma unit, Devon would die a few days later from the injuries. He was 12.

Picking up the pieces

The Spencer family has been very vocal in its pursuit of justice for Devon, as documented by countless media reports and posts on the “Justice 4 Devon” social media page.

Among that group is Spencer’s daughter, Jennifer.

“She just loves him so much,” Spencer said of Devon’s aunt who helped mold his sense of bow-tie preppy style and with whom he’d spend summers. She said it was a month after Devon’s death before law enforcement made the first contact with the family.

As Spencer talks of the months following, details take shape and present the devastating situation for all involved. She tells of eye witness reports of how other children were nearly struck by the moving car that day; how  after the crash the vehicle was repaired before being inspected by law enforcement; and more.

Spencer was walking with a friend that day who was also struck. Miss Williams is charged with assault in that incident. The boy, while recovered from his injuries, is undergoing counsel – as is all the family.

“All of us – me, his dad, my daughter – we’re in counseling,” Spencer said. “Some days it seems like it’s helping, but then, everywhere I look, everything I see reminds me of him. And that’s the hardest thing – to moving on.

“But at the end of it all, all we want is justice,” she said. “That boy was going to make something of himself. That day, if she had just stopped; turned around and called 911, it would have made it just a bit easier. Still, they have to be held accountable.”