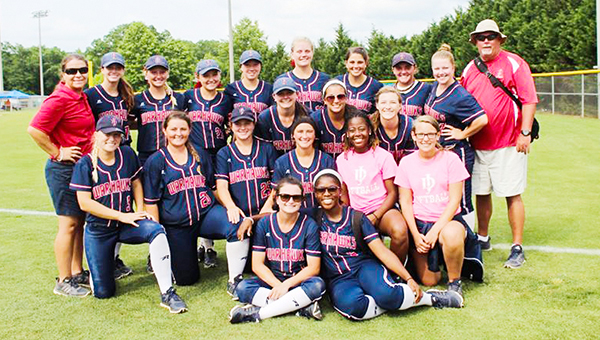 Courtesy photo
JDCC softball at the state tournament in Alabaster.

“I am just so proud of this team,” said head softball coach Misti Nims.

“They are a very special group of young ladies and this sophomore class is going to be truly missed; not just for their talent on the field but for their loyalty, commitment and love for JDCC softball.”

JDCC lost to Snead State in game two 10-2. The Lady Warhawks rebounded in game 11 with a 7-4 victory over Chattahoochee Valley. JDCC continued its pursuit to the championship with an 11-4 win over Wallace-Dothan in Game 14.

JDCC ran out of steam in Game 18 versus Faulkner State, losing 13-0.

Notable performances throughout the tournament were by Allie Richardson and Hannah Brake.

Richardson was 6-for-11 at the plate, including a 3-for-4, homerun game in a win versus Chattahoochee Valley.

Brake had a two homerun, four RBI performance in a win versus Wallace-Dothan. Brake led the team with 15 homeruns and 47 RBIs this season.

Nims said the JDCC softball team has battled through a lot of adversity this season and it would have been easy for them to have given up.

“(Quitting) was not the case,” Nims said.

“It has been a struggle this season but I told them that it doesn’t matter how you start, it is how you finish.”

Despite its 13-42 record going into the tournament, JDCC worked its way to qualify for the ACCC state tournament, its eighth during Nims tenure.

At the tournament, the Warhawks showed up and went farther than any team under Nims.

Along the way to a fifth place finish in state, the Lady Warhawks defeated Chattahoochee Valley and Wallace-Dothan, teams that previously swept JDCC in the conference.