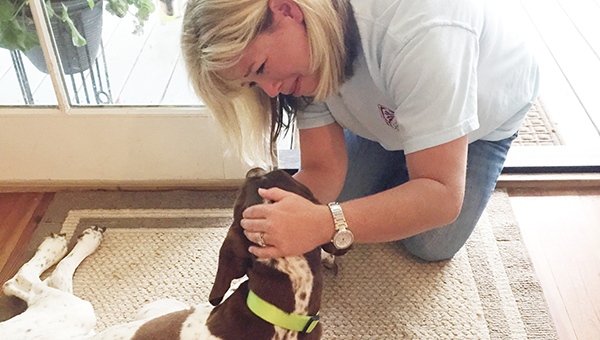 He is expected to make a great recovery before being reunited with his Gardendale family Sunday.

Charlie, a 12-year-old German shorthaired pointer, was believed stolen from the Dove family’s backyard in late spring 2005. Trey Dove was 8 at the time.

Throughout the family’s moves within the state, the dog’s microchip information was continually updated in the hopes he would one day be found.

And thanks to the dedication of the Escambia County rescue group Souls on Board, that dream is one step closer to becoming a reality.

Nearly two weeks ago, Charlie was found on the porch of Damascus Assembly of God – sick from a large cancerous tumor. He’d been there for three days before the rescue was contacted. Since then, Charlie has been fostered at the home of Melissa McMillan. 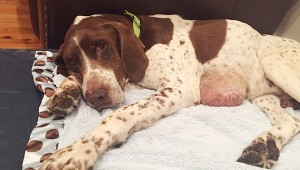 “I think he was really close to giving up,” McMillan said of the hunting dog. “He was so sick, so weak. We took him straight to the vet.”

When the vet tech suggested scanning the animal for a chip, McMillan expressed her doubt and then her immediate surprise when the results came back.

McMillan said all involved believe that when the dog began to show signs of illness, he was discarded.

“This is a fast, aggressive cancer,” McMillan said of Charlie’s diagnosis. “But now, potentially and thanks to this surgery, Charlie could have many more years with his family. Even though the tumor is cancer, they think they can get it all.”

Tuesday morning, Tracey Dove drove to Brewton to see the dog before he headed to a Mobile animal hospital for treatment of a cancerous tumor. That tumor is believed to be the reason Charlie will now spend the remainder of his days with his original owners, McMillan said.

“I try to imagine how Tracey feels – how he was lost as a puppy,” McMillan said. “There were a lot of tears (Tuesday) morning. Everyone was so happy. Charlie doesn’t get excited about much, but I think he remembered her.”

From desk to garden