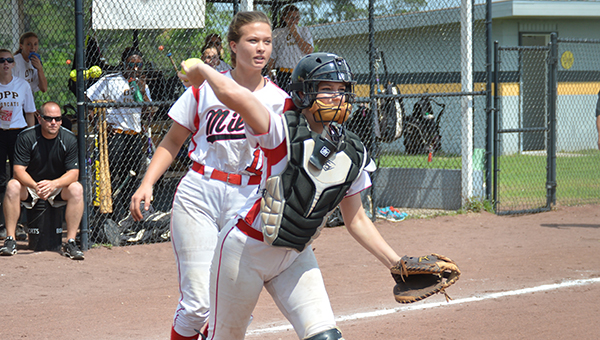 The T.R. Miller Lady Tigers fell second to Opp in the area tournament last week after losing its second game 4-3.

Mallori Floyd was 2-for-3 with a double and three RBIs. Madison Douglas was 3-for-3.

Yasmine Woods and Dominique McCreary each had a hit for Hillcrest.

Myra Reiss was the winning pitcher. Reiss struck out two batters and walked none.

Miller leftfielder Morgan Longmire had a big game at the plate, going 2-for-3 with a double and three RBIs.

Still Miller faltered in part due to the equally impressive game at the plate by Maggie Short. Short was 2-for-4 with a triple and five RBIs.

Taylor Austin was the losing pitcher.

Miller scored two runs in the first inning, 15 runs in the second and nine runs in the third. Mallori Floyd was 3-for-4 with three RBIs. Myra Reiss was 2-for-3 with 4 RBIs. Mary Madison Brown had two hits and a game high 5 RBIs. Anna Grace White and Grace Ruzic each had 2 RBIs.

Down 3-0, Miller got on the board in the fourth inning when Taylor Austin homered to centerfield.

Miller scored on a fielder’s choice and a pass ball. Grace Ruzic doubled to get on base as the tying run.

Opp pitcher Sarah Kidd was able to strike out the next batter to end the game.

Miller will play Geneva on May 13 at 1:30 p.m. at the Gulf Shores Sportsplex in Gulf Shores.