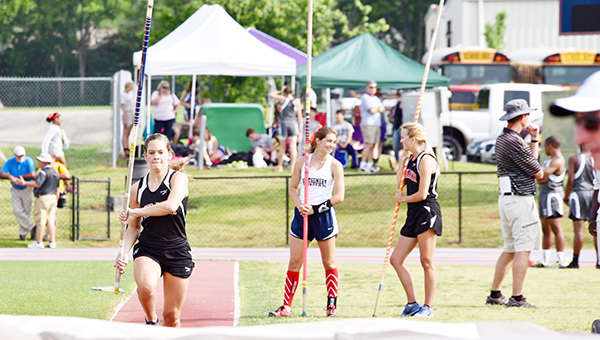 It was a spectacular weekend for the T.R. Miller track and field teams as the girls’ claimed the 3A state championship title.

Coach Eddie Brundidge said it was a fitting end to the season.

“These kids worked extremely hard all season long and we couldn’t be prouder of the results we saw (in Cullman),” Brundidge said. “A number of them brought home medals for T.R. Miller and those were well deserved.”

During the meets, top 10 finishes are ranked on a scoring system, with a first place spot earning 10 points; second, nine points; and so on. The girls team racked up an impressive 92 total points, while second place finisher, Cottage Hill, earned 72.75 points.

Smith earned a first place finish in discus with an 89-7 foot throw. 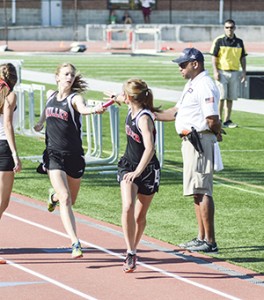 Makayla Harrison also finished the season with an impressive record, earning second in the high jump and 100-meter hurdles; third in the triple jump, and fifth in 100-meter dash.

Aleria Smith earned a third place in javelin and 10th in shot put. 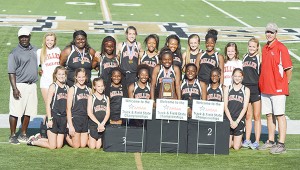 Stephanie Nelson | The Brewton Standard
Coaches Eddie Brundidge and Rob Atkinson and the team pose with the state award.

In the boys’ competitions, Ahmad Taylor helped to rack up the points for the team’s sixth place overall finish.

Taylor, a senior, earned a first place win in the triple jump; fourth in the 110-meter hurdles; eighth in the long jump; 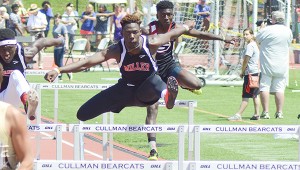 Amhad Taylor clears a hurdle in the 110-meter race.

Henry Davison earned a second place in the triple jump and 10th in the high jump.