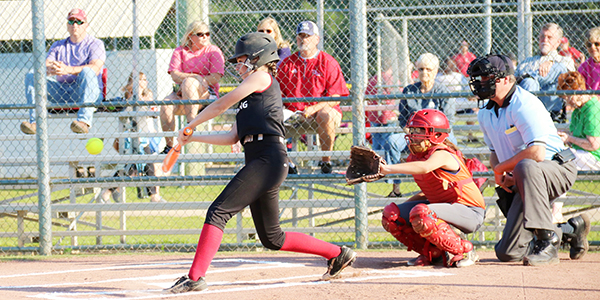 Photo by Allison Terrell
Ansley Till from the Lightning team takes a swing at the plate.

The youth baseball and softball league season for Brewton and East Brewton are heading down the home stretch. Games covered are from April 25 thru May 2.

Eli Adkins struck out eight batters and allowed only two hits as the Orioles edged out the Red Sox in a tightly contested game.

Lowery and Elijah Smith both had a hit for the Red Sox. Smith scored two runs.

Nathan Commander and Sam Kelly combined for the win on the mound for the Braves. Kelly also led the team with two hits and three runs scored.

Easton Grace had seven strikeouts in the lost.

The Cubs exploded for 10 hits in its victory over the Orioles. Collin Nelson was 2-for-3 with a triple and three runs scored to lead the offensive charge. Solomon Crap was 2-for-3 with two runs.

Pitchers E.J. Kelly, Jman Jones and Collin Nelson held the the Orioles to only one hit. Jackson King had the one hit for the Orioles, and also scored a run.

Kaden Peters pitched for the Orioles in the loss, surrendering 10 hits and striking out four batters.

The Nationals had 11 hits as a team. Jack White was 3-for-4 at plate. Caleb Silbernagel was 2-for-4 with four runs scored. Craig Blevins, Micah Tripp and Silbernagel combined on the mound in the win. Blevins had five strikeouts.

Snoop Paul and E.J. Kelly each had a hit for the Cubs.

The Reds got a good pitching performance from Kanar Carter who allowed three hits and struck out eight batters. Miller Hart led the team with two hits.

Brother Peace and Adam White held the Rangers to four hits in the victory. Peace surrendered two runs on four hits and five strikeouts. White allowed no hits and struck out five.

Jordan Sims suffered the loss on the mound allowing seven runs on 11 hits and six strikeouts.

Nolan Atkinson, Tennison Carney, Jaxson Flores and Brackin Pettis had extra  base hits for the Pirates.

Sims, Collin Stinson, Tyler Brooks and Konner Wood had a hit for the Rangers.

Despite recording no hits, the Brewton Fire was able to take advantage of free bases to manufacture runs.

Kaitlyn Barnett was the winning picture of the Fire. Barnett surrendered two hits, two walks and struck out four batters.

Anna Marie Monk and Makenzie Dawkins both had a hit for the Blue.

Lauren Thompson was 2-for-2 to lead the Legends. Makayla Anderson had a triple.

Amiyah Odom had a double for the Silver. Morgan Johnson had a hit.

In a closely contested game, timely hitting can make a difference. Abby Terrell led the Fireballs at the plate with three hits. Kate Najor was 2-for-2. Makayla Mitchell, Chloe Smith and Alliyah Smith had a hit.

Gracie Sims was 2-for-2 at the plate for the Royal. Teresa Harris had a hit.

Jailyn Bondurant pitched the complete game for the Royal, giving up eight hits, three walks and striking out two batters.

Jayda Johnson was 2-for-3 for the Gold. Kennedy Johnson, Madison Hawthorne and Taylor Reeves had a hit.

Madison White was the winning pitcher on the mound, striking out five batters.

Despite having no hits for the game, the Orange scored 11 runs. Blue pitcher Madison Dawkins had 11 walks in the loss.

Precious Howard was the winning pitcher for the Orange.

Anna Marie Monk was 2-for-3 with two runs scored for the Blue. Hannah Moore was 2-for-2. Jade Sowards and Baylie Wyatt had a hit.