The T.R. Miller Tigers saw its season come to an end on Saturday after losing to Gordo in the series finale 8-7.

TRM head coach Kevin Madden said he was proud of how the team competed in the weekend series. 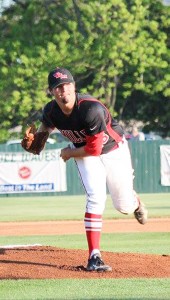 Courtesy photo
No. 16 Tripp Floyd pitches off the mound in game two on Friday.

“Our players showed character and heart and never gave up,” Madden said.

“They exemplified everything that T.R. Miller stands for. It was a great baseball series, unfortunately, we just fell a little short.”

In the first inning the Tigers put up four runs after third baseman Jason Konsler connected for a grand slam.

In the top of the third inning Gordo responded in a big way with six runs.

Miller added a run in the bottom of the inning to make the score 6-5 in favor of Gordo.

The following inning Miller’s Caleb Winton tied the game with a solo homerun.

Gordo added two runs in the fifth inning to put the pressure on the Tigers.

Miller was unable to respond in the sixth and seventh inning.

Jo Jo Booker was 2-for-4 with two doubles. Tripp Floyd was 2-for-4. Jake Najor had two hits.

Miller jumped out early with four runs scored in the first. The Tigers followed up in the second with two more runs.

On the mound Floyd had a good performance allowing three runs, one earned, on six walks and five strikeouts.

At the plate Floyd led the Tiger’s offense with two RBIs and a triple. Jo Jo Booker was 2-for-3. Caleb Winton, Jake Najor and Russell Smith each had an RBI.

Miller opened the game by scoring two runs on an RBI single by Hunter Brittain and a wild pitch.

Gordo took advantage of five walks and scored three runs in the bottom of the inning.

In the third inning, Miller took control of the lead after scoring two runs to make the score 4-2.

The lead was short lived when Gordo’s Davis Vails connected for a two-out RBI single to tie the game up, 4-4.

In the sixth inning Gordo seemed to put the game away with three runs. A leadoff double,  a single, then a one-out RBI single by Colin Herring, followed by two two-out singles provided the scoring. Gordo threatened to score another run before Miller right fielder,  Joshua Winton, fielded a base hit in and gunned down Gordo’s Nick Pounders at the plate, who was trying to score from second base.

Down by three in the top of the seventh inning, the Tigers fought back. Booker singled. Floyd, Konsler and Smith had back-to-back-to-back singles with Smith’s a two-run single. After a flyout, Joshua Winton drew a two-out walk and Stokes Jennings tied the game with a single that scored Konsler. Drew Williamson flew out with bases loaded to end the inning.

In the bottom of the seventh inning in a tie game, Gordo’s Cole Nelson singled with one out to get on base as the winning run.

With two outs, Koy Chapman doubled to the right field corner to score Nelson all the way from first base to win it, 8-7, in walk-off fashion.

Joshua Winton started the game on the mound. Winton gave up five walks and one hit in 2/3 inning of work.

Russell Smith finished out the game in relief of Winton. Smith gave up five runs, four earned on 12 hits and two walks.

In the series both teams scored 19 runs. Ten of TRM’s 19 runs came in the first inning of all three games.

For the series, Jo Jo Booker was 7-for-11 at the plate. Tripp Floyd was 5-for-10 with a double, triple and two RBIs. Jason Konsler was 4-for-9 with a homerun and four RBIs). Caleb Winton was 4-for-9  with a home run, double and three RBIs. TRM averaged 9 hits a game in the series.

He’s letting them fly in Saturday