A Flomaton man is charged with the attempted murder of a Canoe man Thursday night.

The Escambia County Sheriff’s Office is reporting 21-year-old Steven Billiot allegedly shot a man in the arm after a domestic dispute at approximately 10:30 p.m. in an Ala. Hwy. 31 trailer park. 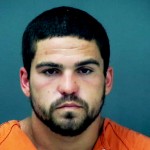 The wound, which was described as severe, required the victim to be transported to a Mobile trauma unit, where Billiot remains currently for treatment.

Along with the assistance of the U.S. Marshals and Santa Rosa County Sheriff’s offices, investigators worked through the night to locate Billiot, who was found in Jay. After a short foot pursuit, Billiot was taken into custody and taken to the Santa Rosa County Jail, where he awaits extradition back to Alabama.