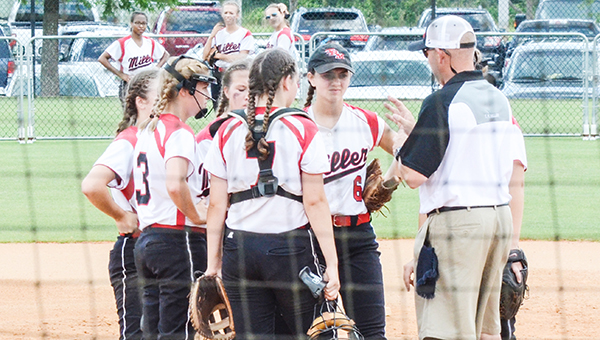 Corey Williams| The Brewton Standard
Interim head coach for Miller for the regional tournament Greg White speak with players during a visit to the circle.

The T.R. Miller Lady Tigers’ season came to an end in the AHSAA Regionals in Gulf Shores versus Excel on Saturday. Miller lost to Geneva in the opening round 10-2, before bouncing back with a convincing win versus Bayside Academy 14-2. Miller suffered its second lost to Excel 10-5.

Tiger head coach Terri Lynne Peacock said her young team suffered ups and downs this season, and in doing so has gained essential experience to take the next step come next year.

“One thing our girls take pride in is playing hard until the final out is called,” Peacock said.

“All of our players will be returning next season. We had some players this season that had to step in to new positions. They did a good job learning their roles and adapting,” Peacock said.

“We will use the off season as a time for each individual to work on their skills and make any adjustments that will prepare them for next year.”

Miller trailed Geneva early in the game and couldn’t quite rebound.

Myra Reiss had two hits and a run scored.

Megan Lamb was the winning pitcher for Geneva. Lamb gave up two hits in five innings of work.

Taylor Austin suffered the loss from the circle. Reiss came in late in the game for relief.

After Bayside Academy jumped on the board with a run off the bat of Erin Brown, Miller got its offense going in the bottom of the inning.

Taylor Austin singled down the third baseline to score a run. Another Miller run scored on a pass ball. Mary Madison Brown drove in a run on a sacrifice grounder to second base. Later in the inning Grace Ruzic tripled to score another run. Miller led 4-1 at the end of one.

In the second inning, Miller picked up right where it left off. Miller scored its fifth run on a Bayside error. Next at bat, Austin doubled to score Myra Reiss and Madison Douglas. Anna Grace White singled to score another run.

In the third inning, Lauren Chastang of Bayside singled to score a run. In the bottom of the inning Miller’s Morgan Longmire led off the inning with a bunt. After an errant throw by the Bayside infielder to the outfield, Longmire rounded all the bases to score a run. Another Bayside error brought home two more runs for the Lady Tigers. Miller scored two more runs on a triple by Douglas and double by Taylor.

Austin pitched the complete game for Miller, walking three batters and struck out three in the win.

Madison Douglas was 3-for-4 with an RBI.

Mallori Floyd had two hits and 2 RBIs. Gabbi Solomon was 2-for-2 with two runs and two stolen bases.

Marly Malone of Excel had a homerun and a double to lead the team. Keri Waters was 2-for-3 with a double.