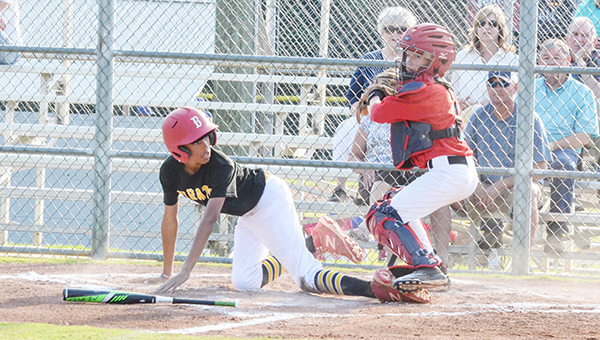 Corey Williams | The Brewton Standard
Trent Cooper of the Pirates slides home against the Reds.

The 12U Cal Ripken League was in action on Thursday with the Brewton Pirates facing off against the Brewton Reds in a doubleheader.

The Pirates won game one 8-4. The triumph was short-lived, for the Reds took game two 10-4 to split the head-to-head matchup.

The Pirates got going with five runs in the first inning. In the second inning the Pirates continued scoring with three more runs to take an 8-0 lead.

But the Reds showed life in the bottom of the second by taking advantage of some errors by the Pirates. The Reds scored four runs.

Pirates’ pitcher Jaxon Flores settled down after the inning and held the Reds scoreless the rest of the game.

Nolan Atkinson was 2-for-2 with a double and RBI for the Pirates. Trent Cooper was 2-for-3 with an RBI. Brother Peace had a hit and RBI.

Flores picked up the win on the mound. Flores gave up four runs, three earned, on six hits and five strikeouts.

Ed Dolihite suffered the loss on the mound giving up eight runs, two earned, on four hits, three walks and two strikeouts. Carter came in for two innings of relief, giving up one hit, two walks and striking out three batters.

Kyle Blevins had a solid outing on the mound, striking out seven batters to lead the Reds to victory.

Kanan Carter was 2-for-2 with an RBI for the Reds. Ed Dolihite was 1-for-2 with a double and RBI. Peyton Rowell had single and two RBIs.

Blevins surrendered only three hits on the mound in the win.

Rowell suffered the loss for the Pirates, giving up five runs on one hit and four walks. Trent Cooper pitched in relief and surrendered five runs on four hits while striking out four.