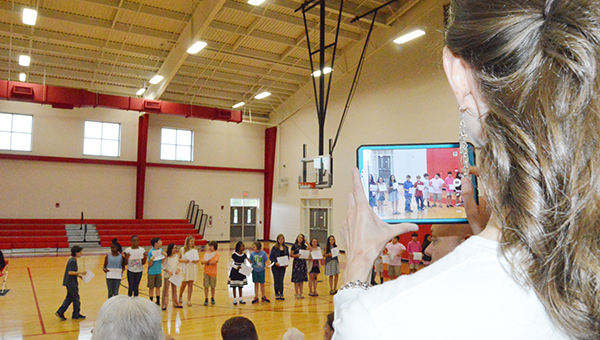 Brewton City School students will soon be wired – not only because summer break begins next week, but also because a statewide push to bring wireless internet to all campuses will be implemented at all three BCS schools.

The BCS board voted Monday to award a contract to Synergetics to install some wireless access points that will handle 50 devices at a time on the wireless network.

Under the new Alabama Ahead Act, schools are required to have a system that will handle at least 40 devices per access point and provide wireless service to one-third of the student population in common areas such as media resource rooms.

The current system, thanks to recent construction at T.R. Miller and Brewton Middle School, is less than five years old and currently utilizes 35 access points which will handle up to 25 devices per access point, Superintendent Dr. Kenneth Varner said.

“What we have now is not up to the standard,” Varner said. “After the completion of this project, we will have a very robust system that will provide access for all students in every classroom – which is amazing.”

The $55,000 project will use $23,373 through the Alabama Ahead Act funding with remainder covered by federal E-Rate funds.

Once completed, the system will boast 116 access points among the three schools.

“Because we already had our infrastructure in place (to provide wireless internet on the campuses) we were very lucky,” Varner said. “Where other schools are going to be looking at hundreds of thousands of dollars, we will be able to capitalize on what infrastructure we have in place, which saves us money.”

The project is expected to be completed by the start of school in August.

In other business, the board:

• recognized the 2016 TRM girls track and field team for winning the 3A state championship;

• announced a reception will be held on Fri., May 20, from 4-6 p.m. at the central office to welcome new band director Brandon Cornutt; and,

• approved the voluntary religious expression and code of conduct policies.