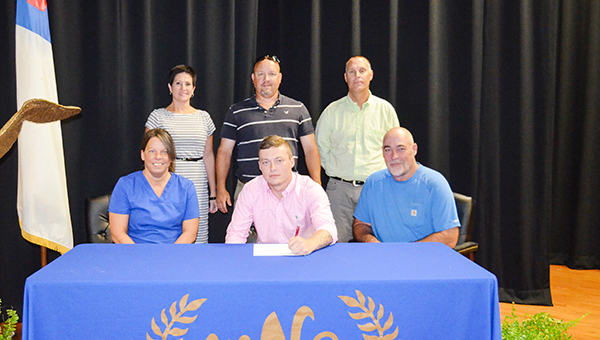 W.S. Neal senior Jared Cooper will lace up the cleats again. This time it will be at the next level. Earlier this week Cooper signed a baseball scholarship with the Jefferson Davis Warhawks.

“I’m just thankful for this opportunity,” Cooper said. “I love the game of baseball. This was the best option for me. This is my hometown so it’ll be a good transition for me academically and financially.

His senior year on the field, Cooper batted .276 with 17 RBIs and one homerun. On the mound Cooper had a 4-3 record in 40 innings of work.  He had an earned run average of 3.67 with 46 strikeouts and 37 walks.  Cooper threw a no hitter on Feb. 26, against Flomaton. He had a season high nine strikeouts on March 7 versus cross-town rival T.R. Miller.

In the postseason against Andalusia, Cooper batted .600 with four RBIs in three games. On the mound he picked up the complete game win in a must-win game two, striking out eight batters.

Cooper said JDCC plans to use him on the mound.

“I want to work on throwing more strikes and improving my velocity,” Cooper said. “I want to mature on the mound and become well rounded.”

“(Cooper) has worked hard,” Campbell said. “To get this opportunity to play at (JDCC) is great for him.  It’s great for his family. It’s great for the community. If he applies the same work ethic like he has the past years here, he has a chance to be successful there. It’s ultimately up to him.”

Parents Jeff and Sherri Cooper  are happy to be able to continue to watch their son play baseball.

“It’s great watching him play,” Mr. Cooper said. “It’s great he gets a chance to play baseball and to continue his education.”

Southeastern Golf Tour to tee off June 1 at…