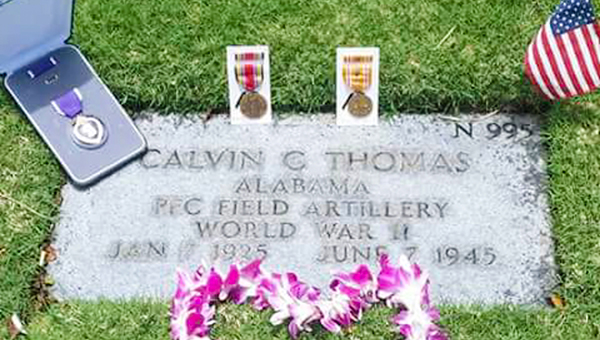 Pictured is Thomas’s gravesite in Hawaii. Left: Mary Turner and Kathy Boyce pose for a photo.

Each day, many pass by the stone-etched reminder of sacrifice in front of the Escambia County Courthouse, never giving a thought to the what and who left behind after those brave soldiers gave their all for our freedom.

But that’s not the case for Calvin Thomas’ family and friends. The East Brewton native and son of Gussie Thomas died in World War II in Okinawa. When the American cemetery closed on the island, his remains were moved to the National Cemetery in Hawaii.

On May 22, Kathy Boyce – a longtime family friend – sent back to his family a reminder that his sacrifice was not forgotten.

“Calvin was my mother, Vernell Aspinwall’s older brother,” said Mary Turner from her home in the Florida Keys. “Kathy’s mom and my mom were friends before our birth. We have been lifelong friends, and when she said she was going to vacation in Hawaii and wanted to this for us, it was an amazing thing.”

Boyce made the overseas journey with items of great importance – the original telegraph telling Turner’s grandmother of her son’s demise and medals awarded on his behalf and the deep bonds of friendship.

“Every time I look at that photo she took, I tear up,” Turner said. “She took such great passion on arranging the items. Of course, I never met my uncle, but we heard stories from my mom and grandmother.”

Born in 1925, Thomas was killed in action on June 7, 1945 – the day marked in history as the defeat of the Japanese on Okinawa. He was 20. The Pacific island was a long way from the Bradley area where he was born and raised, but on this Memorial Day, all give thanks to PFC Calvin C. Thomas, field artillery, and others for their sacrifice and dedication to our country’s freedom.