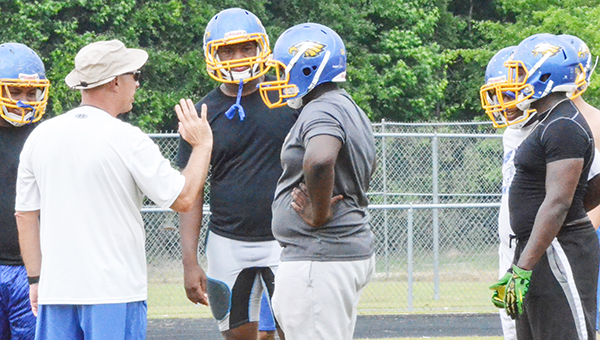 W.S. Neal football ended its spring training last week. Due to bad weather three days of workouts plus the spring game against Saraland was wiped from the schedule. Despite the limited time, head coach Doug Hoehn said the coaching staff really liked how their players worked hard.

“I think Jacobey Hawthorne has improved at quarterback,” Hoehn said.

“What’s important is our players play hard and physical football, those are some things we don’t have to talk about nearly as much as we did early on when I got here.

“It’s part of the program now,” Hoehn continued. “The kids are expected to take on those traits if they want to play football here.”

Neal football will see 12 seniors graduate this week, of the twelve most were vital pieces at the skilled positions.

“We got to find some replacements in some key skilled positions,” Hoehn said. “We’ll continue to work over the summer and try to figure out the best place to fit these kids in for the seniors we lost this year, particularly at the running back and wide receiver positions.”

Hoehn said it’ll take the summer, possibly up to the first game of the fall to determine the skill positions.

“Those positions are open right now,” he said.

“We’ll continue to evaluate those skilled spots over the summer. At this point we’re not ready to name starters.”

With a relatively young group, Hoehn said the strength of the team this upcoming season will be the offensive and defensive line. 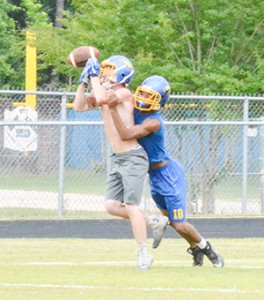 Corey Williams | The Brewton Standard
A Neal defensive back and wide receiver battle for the ball.

“We might have to move one offensive lineman, but either way we’ll have three to four returning starters. That’s important because we like to run the football. We try to be a physical football team that runs the football.

“On defense we’ll have three defensive linemen back, which gives us some good experience up front.”

Hoehn said the focus during spring practices have been the fundamentals.

“Spring practice is a chance for the young kids to learn the offense and defense and for the kids who have already been with us to work on proper technique. Ninety percent of what we work on in the spring is strictly fundamentals.”

This upcoming season Neal will face some opponents for the first time in Carroll High School and Tallassee, and opponents not played against for over five years in Andalusia, and a decade in Aliceville.

“We’re just going to have to try to get better every week,” Hoehn said. “Hopefully by the end of the season we will have a good football team.”

The Eagles will open up its season on Aug. 26 on the road against Tallassee.