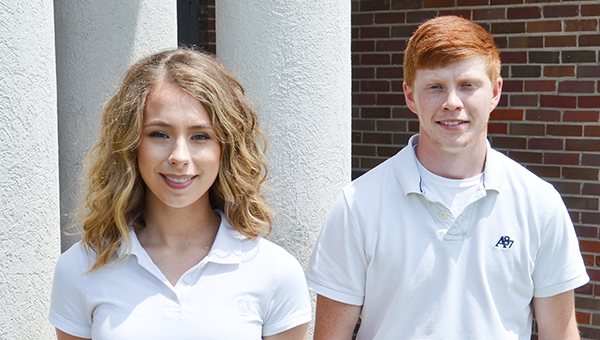 Both, along with other members of their graduating class will cross the stage on Thurs., May 26 at 7 p.m. at WSN.

Cooper, the daughter of Wendy Shue and the late Scott Cooper, was elected as president of the Key Club and was inducted into many academic honor societies such as Mu Alpha Theta and the National Honor Society.

She plans on earning a bachelor’s degree in nursing, then a master’s degree and specializing in nurse anesthesia.

“In 20 years, I see myself as a working, productive member of society, following the Lord where He may lead me,” Cooper said.

Cooper said what she’ll cherish most from her academic journey so far is the collective experience as a whole.

“In this I’m able to reflect on my growth both academically and personally,” Cooper said. “I’m proud of this and will forever be grateful.”

For those wishing to follow in her footsteps, Cooper believes anything can be achieved if you’re kind, humble and deliberate.

“Compete with only yourself, not others, to be the absolute best version of yourself in everyway,” Cooper said.

Brantley, the son of George and Christine Brantley, was active in Scholar’s Bowl and a member of Mu Alpha Theta, Future Farmer’s of America and the National Honor’s Society.

He was the recipient of the Phillip Ellis Award.

Brantley plans to get an associates degree in drafting and design then transferring to either Alabama or Auburn to major in civil engineering.

“(In 20 years) I hope to see myself with a good family and career in my respective field,” Brantley said. “I hope to live in a good small town like Brewton, maybe even Brewton. I hope that I can provide for my family and give them the opportunity to be successful.”

After graduation Brantley said what he’d miss most is the good times he shared with his friends.

“I’ve enjoyed my senior year more than I ever imagined I would. I hope that students after the class of 2016 enjoy their senior year as much as I have.”