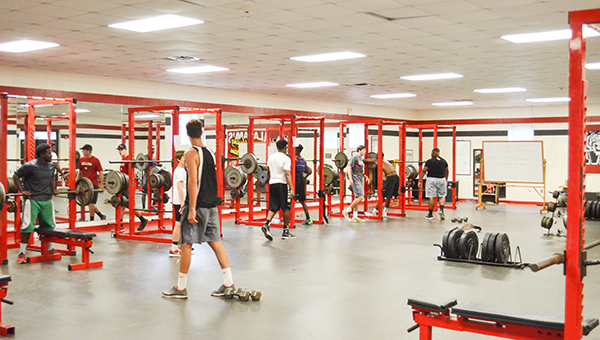 Miller gets ready for summer workouts

Summer workouts are rapidly approaching with the T.R. Miller Tigers on the verge of hitting the weights in full stride.

This year around workouts will be a little different on two phases. It’ll be the first summer workout season under head football coach Andrew Thomas and he plans to get his team in shape for the upcoming season. With adjusted workouts focused on power and explosion, Thomas said there is a combination of both slow-twitch and fast twitch exercises.

The weight room has gone through a transformation. Where things may have seemed denser before, weight stations and workout machines have been placed to create a spacious workout area. Thomas said this is all by design.

“Basically what I did was try to put everything into stations,” Thomas said.

“We’ve got a bench station, squat station, open section, for moves like power cling; and an auxiliary lift station, which I also call the beach body corner, which is for shoulders, curls and movements to hit the small muscles.”

Thomas said another station could be added outside for summer workouts.

The design allows efficiency. During workouts, players work in groups of three at the four different stations. The first athlete of each group on each station steps up to the bar and waits to hear the sound of a whistle reverberate through the room.

“No one hits a rep until I hit the whistle,” Thomas said. “They all have to sound off and then everyone hits their reps. We’re constantly moving. After the player switches then the next guy gets ready. Whistle goes off. Everyone goes again.”

In this case, there is some method to the madness Thomas said.

“You’re kind of building a little discipline having everybody working at the same time,” Thomas said.

“Coaches know who’s doing what. The tempo is going fast but it’s controlled. Players hit the weights. They rotate. After they hit three sets, bench rotates to squat, squat rotates on and so forth.”

At the end of all workouts, there will be a 10-minute period where players will be tested physically, mentally and emotionally.

Players will split up between five stations evenly. Each player will go one minute nonstop at that station.

A player might be doing a move coined the “Man Makers” (an extreme version of the burpee) or the “Truck Driver” where the lifter takes a weighted plate and works it out in front of himself twisting left and right like a steering wheel.

“There’s just a lot of stuff that’ll kick your butt,” Thomas said. “It’s five minutes, nonstop with about 10 seconds in between rotations. If somebody’s dragging we’ll stop and start all over.”

After the first cycle, players ready for cycle number two.

“It can get pretty nasty,” Thomas said.

“We’re just trying to develop that toughness and push the players further than they can go.”

Thomas said he has one main goal set for his team this summer.

“My goal is to not let them set limits in their minds,” he said.

“I believe that’s what success is built off of. We want to outwork people. I want to take these kids past what they thought they could do and show them what they can do. “

Johnson to be featured on ‘Spartan Challenge’