A Battle to the End: 8U Opp wins district over Brewton 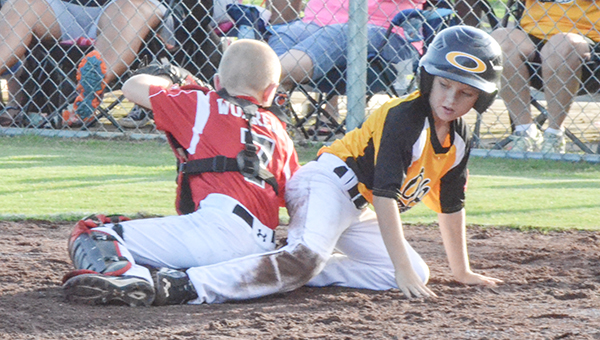 Corey Williams | The Brewton Standard
An Opp baserunner slides in safe as Brewton’s Emerson Worrell attempts to tag him out in game one. Brewton won game one in extra innings, 10-9.

It was a back-and-forth battle between Opp and Brewton for the 8U District Championship Monday night. In the end there could only be one victor and that was Opp, who withstood losing an extra inning battle to Brewton in game one, 10-9, by bouncing back in game two with an 11-7 win.

Jonah Winton singled home a run to give Brewton a 1-0 lead. Opp responded with two runs in the second inning on a fielder’s choice and RBI single by Cash Harrell.

Brewton tied the game on a sacrifice hit by Matt Goldbolt.

In the third inning Opp got cooking. Tucker Short knocked in an RBI. Later in the inning Matt Ashberry pummeled one to the outfield for two runs. Opp led 5-2 going into the bottom of the inning.

Brewton responded with resilience with RBIs by Evan Anthony and Emerson Worrell. The score was 5-4, in favor of Opp at the end of three.

Opp looked to put the game away after an Ashberry triple and Porter Nelson hit for two runs. 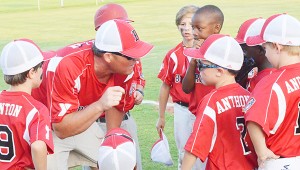 Corey Williams | The Brewton Standard
Brewton head coach Rigby McMillan speaks to his team as they battle to win in extra innings in game one.

With their backs against the wall Brewton put its efforts all on the line. Cole McMillan connected for a clutch triple to score two runs to make the score 8-7. Later in the inning Rho Stallworth smacked a hit to the outfield for a triple and game-tying run. On the same play, Stallworth rounded third to score the game winning run, but was thrown out at the plate to force extra innings.

In the ninth inning Opp got their go-ahead run on base after a triple by Ashberry. Ashberry scored later in the inning off a sacrifice fly. Opp led 9-8 going into the bottom of the inning.

Brewton tied the game again off an RBI single up the middle by Benton Bethae to score Will Clark, who singled earlier in the inning. Next at bat, Cole McMillan squared up the ball for a hit to score R.J. Smith for the game-winning run and to force a game two for the district championship.

Opp got on the board first with a two RBI double by Matt Ashberry. Brewton responded in the top of the third inning with two singles to start the inning. Alex Daniel singled home two runs to make the score 3-2 in favor of Opp. Later in the inning Brewton’s Emerson Worrell connected for a single to score Daniel and tie the game, 3-3.

Opp picked up a run in the bottom of the inning to take back the lead, before Brewton scored two runs in top of the third off a single by R.J Smith and a fielder’s choice.

With Opp trailing 5-3 in the third inning, Porter Nelson smacked a hit to the outfield. The hit proved to be a three-run inside the park homerun. Opp scored five runs in the inning to take an 8-5 lead.

Brewton scored two runs in the fourth to bring the score to 8-7.

In spirit crushing fashion, Brewton made two errors in the fifth inning that led to two runs. Opp’s Nelson also added an insurance run with a sacrifice fly to make the score 11-7.

Brewton was unable to get anything going in the sixth inning as Opp recorded three straight outs to win the game and the 8U District Championship.