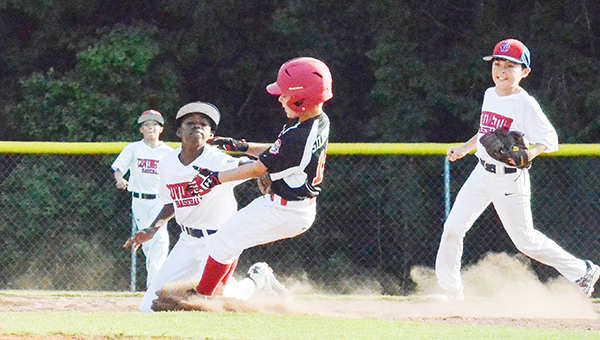 Corey Williams | The Brewton Standard
Brewton’s Caleb Silbernagel gets tagged out at second base by Covington County shortstop Javen Poindexter. Brewton went on to lose the game 2-0 for its first loss of the tournament.

Opp defeated Brewton 9-2 to win the 10U district title on Sunday. Opp remained undefeated throughout the tournament. Brewton defeated East Brewton, Evergreen and Covington County on its way to compete for the championship. East Brewton was 1-2 in the tournament dropping game one to Brewton, before rebounding with an impressive 16-6 win against Covington County. East Brewton was eliminated by Brewton after losing its second game, 13-2.

Sam Kelly picked up the win on the mound while Jim Daugherty and Jax Fillmore led Brewton with homeruns at the plate on offense.

East Brewton jumped out early with the bats scoring three runs in the top of the first inning. Brewton rallied for five runs in the third inning and six runs in the fourth inning.

Collin Nelson had six strikeouts on the mound for East Brewton.

It was a pitching classic between the two teams Covington County pitcher Langham Ward Williams hurled a one-hitter off the mound in a winning effort.

Caleb Silbernagel struck out five batters in five innings of work for Brewton in the loss.

Silbernagel gave up only two hits; both a single and triple to Covington County shortstop Javon Poindexter.

John Moore had the lone hit for Brewton.

East Brewton went on an offensive explosion in their first win of the tournament.

Collin Nelson and Brody Brown had big games at the plate. Nelson had three doubles with an RBI. Brown had a double and a triple with an RBI. Jasean Jones was 2-for-3 with two RBIs. Cade Campbell had a hit and two RBIs. Cohen Ziglar had an RBI. Easton Grace had a triple.

Grace picked up the win on the mound. Jones came in the game for relief for the save.

Craig Blevins and John Wesley Sessions combined for the win on the mound. Both had a combined six strikeouts on seven hits.

Evergreen tied the game 2-2 in fourth inning, but Brewton exploded for six runs in the bottom of the fourth and four runs in the fifth inning.

Sessions was 2-for-3 with two doubles and three RBIs to lead Brewton. Sam Kelley was 1-for-3 with 2 RBIs. Jim Daugherty had a triple and two RBIs. Blevins and Micah Trippe went 1-for-2 at the plate. Tyler Hoomes and Thomas Lowery had a hit.

John Wesley Sessions had five strikeouts on the mound and Caleb Silbernagel had three hits to lead Brewton in the victory.

Silbernagel had two singles, a triple and two RBIs at the plate. Craig Blevins was 2-for-3 with a single and double for two RBIs. Sessions had two doubles for two RBIs. Jim Daugherty had two singles. Bruadie Anthony had a triple. Gavin Tieppo and Micah Trippe had a hit.

Nelson suffered the loss on the mound for East Brewton.

Brewton pitcher Sam Kelley was dealing off the mound striking out 13 batters and allowing only four hits in a must win game.

Caleb Silbernagel, Micah Trippe, Craig Blevins, John Wesley Sessions and Sam Kelley were 1-for-3 at the plate. Jim Daugherty was 2-for-2.

Leading 3-1 thru three innings, Opp distanced themselves from Brewton in the fourth and fifth innings with six runs to win the game and district championship.

Pitcher Caleb Silbernagel had four walks and seven strikeouts in four innings of work for Brewton.

Sam Kelley was 3-for-3 with two singles and a double.