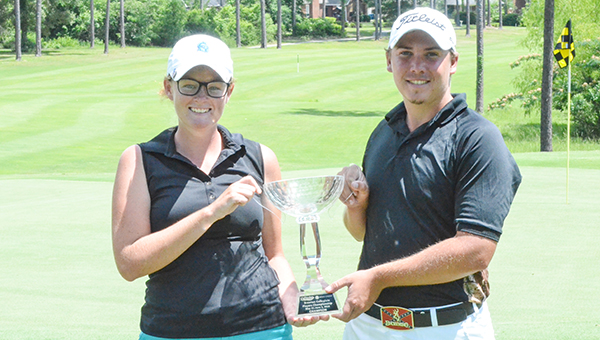 The Southeastern Collegiate Golf Hardees/Windcreek Casino Brewton Collegiate Classic came to a close on Friday at the Country Club of Brewton.

Lauren Lamm and Henry Westmoreland, both of the University of West Florida and first time winners of the classic, took home the first place trophy for the women’s and men’s division.

Lamm, a sophomore at West Florida, shot an even 72, with three birdies in the final round on Friday. She totaled with a final score of 218. Lamm, who is working her way back from a dislocated wrist, said she was satisfied with her play in the tournament but knows she has room for improvement.

“There’s still a couple of kinks to work out. First two days I shot a 73. Each of the first two rounds  I had four birdies, so I’m right on the verge of being a really solid player. (Friday) I shot even and had three birdies. There’s still room for improvement, but overall it was a good tournament for me.”

Lamm will next compete this summer in the Hardees/Windcreek Casino Collegiate in Perdido. Fla. She will also internship at Marcus Pointe Golf Club in Pensacola, Fla.

Westmoreland finished the tournament with a first place score of 208.

“I had a lot of birdies. First round I had six birdies and an eagle. Second round had four or five birdies and I had seven birdies today. My putter was working pretty good and my iron was pretty solid. I just kept focused and played my own game.”

To round out the top-finishers for the women’s division, Samantha Gotcher of Middle Tennessee State and two-time winner of the event and Kelli Murphy of Auburn University both finished tied for second place with a score of 222.