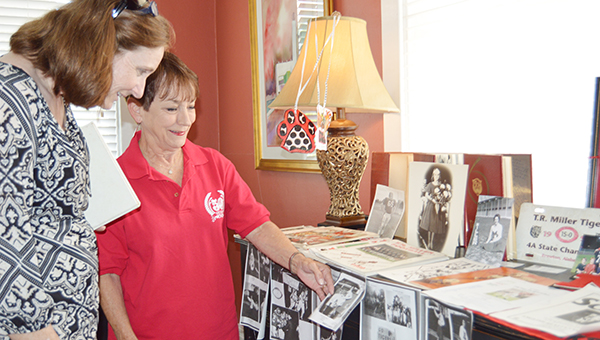 Stephanie Nelson | The Brewton Standard
It was a ‘rah-rah’ good time Thursday as locals kicked off the Smithsonian exhibit ‘Hometown Teams’ with a pep rally at English Realty. Here, Brewton’s director of program management Connie Baggett looks over some of the donated items with Betty Pickard.

The finishing touches are being implemented this week in preparation for the Friday opening of the traveling Smithsonian exhibit “Hometown Teams.”

The exhibit, which highlights the way sports shape our everyday lives, will be open Fri., June 10 through July 25. The main display is featured in the old Everage building on the boardwalk, with additional displays featured at Swain’s Sandwich Shop, the Purple Paisley Boutique, Antigone’s and The Dot Shop.

For months, volunteers have worked to ready the city for the exhibit – collecting memorabilia from all aspects of the sporting world from band uniforms to football jerseys and the stories of how Brewton and the surrounding areas love sports. 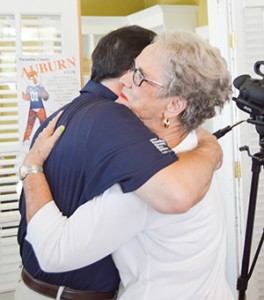 Stephanie Nelson | The Brewton Standard
Yvonne Harrell, a member of TRM’s class of 1957, shares a hug with Stephen Smith.

“One of the features in the Hometown Teams exhibit will be a streaming video featuring those who came gave their stories,” said Brewton’s director of program management Connie Baggett. “These alumni from both T.R. Miller and W.S. Neal High School  – former players, coaches, cheerleaders, band members, or fans – were welcomed to come share their experiences from their time being a part of one of our hometown teams. We look forward to hearing these nostalgic, inspiring and hilarious tales from the Battles of Murder Creeks past.”

There is a need for volunteers to help hang the remaining artwork and items before the Thursday opening. To volunteer, contact Baggett at 867-3224.

A number of social events are scheduled in the coming weeks as part of the festivities:

• June 25, 3 p.m.: Tailgating tasting competition on the boardwalk. There is a $10 entry fee and contestants may choose to cook any type of “tailgating food” such as burgers, wings, potato salad, etc. Voting for each tent as a whole for food. Prize is $500 for the amateur division and a trophy/banner for the professional division. For more information, contact Stephen Smith at 251.295.1221 or Alexia Swain at 251.236.2632.