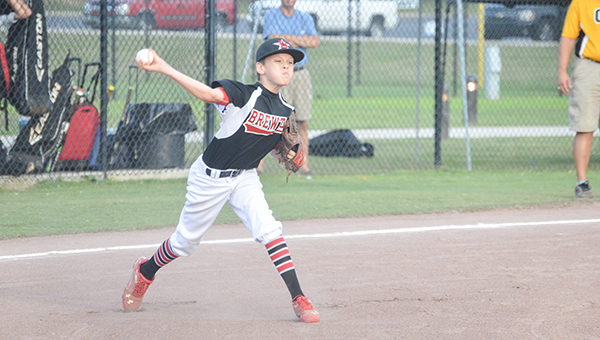 Josh Dutton | Andalusia Star-News
Brewton starting pitcher Miller Hart fields and bunt and fires to first for the out in Sunday’s championship game against Opp in the Cal Ripken 12U district tournament in Andalusia.

Both offenses were running on all cylinders Sunday as the Brewton Tigers 12U and Opp combined for 24 runs. Brewton eventually won the offensive battle 15-9 in six innings.

In the bottom of the first, Brewton grabbed the early lead, 3-0. The Brewton attack began with a single from Jaxson Flores. The scoreboard lit up again for Brewton when Flores scored on an RBI single by Trent Cooper and Cooper scored on a passed ball.

Opp got on the board in the top of the second with an RBI single by Tanner Hall. Opp scored another run later in the inning to make the score 3-2, Brewton.

It didn’t take long for Brewton to respond as they scored three runs of their own in the second. Brewton scored on a passed ball, an RBI single by Flores, and an RBI double by Cooper.

Brewton’s bats came to life again in the fifth inning, catching fire for eight runs. Brewton scored on a steal of home by Logan Rowell, an RBI single by Brother Peace, a two-run home run by Kyle Blevins, an RBI single by Ed Dolihite, and a two-run double by Bracken Pettis. 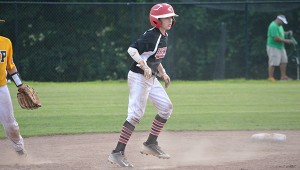 Opp responded with one run on a sacrifice fly by Pirce. Flores forced a ground ball to second baseman Miller Hart to end the game and win the district championship.

Flores recorded the win for the Brewton. He allowed one run over two innings. He struck out one, walked none and surrendered three hits. Hart pitched four innings allowing eight runs, five earned, on nine hits, with three strikeouts.

Pirce led Opp at the plate, going 3-for-4 with two doubles and three RBIs. Tanner Hall was 3-for-3 with an RBI.

Hall was charged with the loss on the mound for Opp. Hall lasted just one-third of an inning, walked one, struck out none, and allowed no runs.

There were 27 hits, including six extra base hits in the game.

Opp opened the game with four runs. Brewton responded with a run in the bottom of the inning.

Opp got going again scoring three runs in the second off an error, double by Robbie G and single by Walt S.

Brewton went to work in the bottom of the inning scoring five runs to make the score 6-7, Opp. Opp scored two runs in the third, but Brewton bounced back with five more runs to take the lead 11-9.

In the fourth inning Brewton scored two runs on an error by Opp and fielder’s choice. Brewton tagged on an insurance run in the fifth inning and held Opp to one run in the top of the sixth inning.

Kyle Blevins was 2-for-4 with two RBIs. Trent Cooper was 2-for-3 with a double and an RBI. Logan Rowell had two hits. Jaxson Flores had two RBIs. Bracken Pettis had a hit.

Cox suffered the loss on the mound for Opp.

Flores earned the win on the mound for Brewton.

It was a battle to the end, but the Covington County 12U All-Stars fell 5-4 to East Brewton Friday in the second round of the Cal Ripken 12U District Tournament at Johnson Park.

In the opening frame, Jordan Crane reached on a fielder’s choice and then came around to score when Nathan Pate crushed a two-run bomb well beyond the fence in left field. 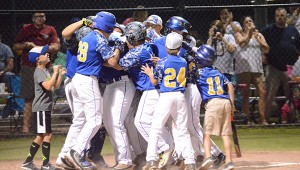 Josh Dutton | Andalusia Star-News
East Brewton’s Nathan Pate gets mobbed at the plate after crushing a two-run blast in the top of the first inning of East Brewton’s win over Covington County on Friday night.

On the mound for East Brewton in the first inning, Crane picked up three strikeouts to end the opening frame with East Brewton on top, 2-0.

In the bottom of the second inning, Crane picked up two more strikeouts and didn’t allow a hit from the Covington County batters. 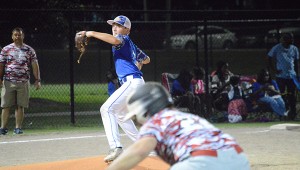 East Brewton got two quick outs to start the top of the third inning before Crane ripped a double into the outfield.

Crane didn’t last long on second base as Josh Hawkins caught him napping and fired back to second base for the pick off. The play also seemed to spark some life on the Covington County side.

Zavier Phillips drew a walk to start the bottom of the third inning for Covington County.

Bedell then ripped a pitch up the middle and into the outfield. Phillips raced around to third and then came around to score when East Brewton threw the ball away. Bedell ended up on third as the tying run with no outs in the inning.

Jered Hawkins then helped out his brother on the mound by roping a RBI double to tie the game 2-2.

Jered Hawkins then stole third and while dancing around off third base, he caused the East Brewton pitcher to balk him home and give Covington County a 3-2 lead.

Crane settled down, regained his composure and punched out the next two Covington County batters looking. Crane then put the inning to a close with a comebacker to the mound, but Covington County was on top 3-2 at the end of three innings of play.

Feeding off the momentum, Josh Hawkins retired East Brewton in order in the top of the fourth inning.

In the bottom of the fourth inning, Parker Spears got things started with a single and then he promptly stole second base.

Spears then moved up to third where he was in perfect position for Micah Turner to drive him in.

The Covington County All-Stars began working the small ball and a perfectly placed bunt from Turner not only scored Spears, but the speedster also picked up a single on the play.

Covington County continued with the small ball, but Mason Anderson was tagged out at the plate on a bunt from Bedell.

East Brewton clawed back in the top of the fifth when Jordan Sims drove in Walker Hoomes with a single up the middle, but East Brewton still trailed by one heading into the final frame.

Konner Woods then mashed a two-run blast for East Brewton to put them on top 5-4.

Covington County wasn’t able to get anything going in the bottom of the sixth.

With its offense’s full support, Brewton’s pitching staff threw a combined two-hitter against East Brewton to win in the third round of the tournament.

Jordan Crane had a double to lead East Brewton on offense. Tyler Brooks had a hit. Walker Hoomes and Nathan Pate each hand an RBI.

Kyle Blevins was 3-for-4, including the homerun with two runs scored. Trent Cooper was 2-for-4 with a double and four RBIs. Miller Hart had two hits with an RBI and three runs scored.

Jordan Simms suffered the loss on the mound. Sims gave up seven runs, four earned, on six hits. Nolan Atkinson was 1-for-4 with an RBI. Kannan Carter had a double.

Rowell picked up the win for Brewton, pitching three innings, allowing two hits and striking out three batters. Atkinson and Bracken Pettis came in the game for a combined three innings of relief. Both held East Brewton to no hits.