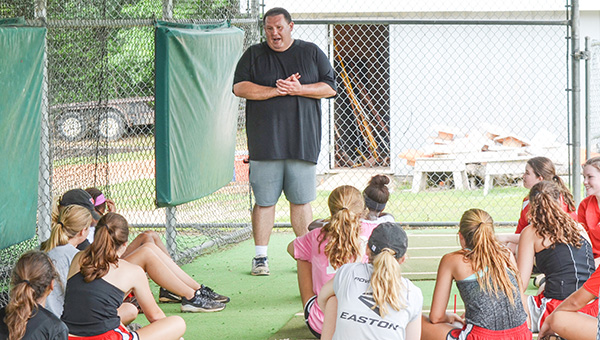 Corey Williams | The Brewton Standard
Chris Baker speaks with his team after workouts on Monday.

Chris Baker has two decades of experience as a coach at the varsity level. That journey will continue after being named as the T.R. Miller head softball coach and offensive coordinator on the Tigers football staff.

“I’m really thrilled with the opportunity to be at such a good program with such a good reputation,” Baker said.

“When Coach (Andrew) Thomas got the job at Miller I was real happy for him. We go back a long way. When I found out there was an opening for a softball coach I decided I wanted to get back involved with softball.”

“That was my first exposure to softball at the time,” Baker said. “I really enjoyed and liked it more than I thought I would.”

In 2002 he moved to Florida to coach at Nature Coast Technical High School in the Tampa area.

In 2014 his family decided to move closer to family members near the Florida Panhandle where he took a post at Tate High School in Pensacola serving as assistant football coach and boy’s head weightlifting coach.

At TRM, Baker said he looks forward to taking the softball team to the next level, a team that finished 21-15 this past season.

“I talked to Coach (Terri Lynne) Peacock and she’s done an outstanding job with the softball program,” Baker said. “I just hope that I can keep building on the foundation she and Coach (Greg) White laid before her and keep this thing going in the right direction.

“I’m really going to take a lot of personal responsibility to get this bunch to the next level to make them the best team possible.”

Baker said he recently met with the softball team and was inspired by their motivation to get better.

Baker said despite being at some larger schools it’s the smaller schools he finds the deepest connection.

“I really love the small communities and the passion that people have in them,” Baker said. “I also know that comes with a lot of responsibility. That gets me excited. I like places kids want to be pushed and want to be coached hard. A place where kids expect to have success every time they walk out on the field. That’s what gets my blood pumping. Even though I’ve been doing this for over 20 years it almost feels like I’m starting over again and that’s exciting.”

As well as serving as offensive coordinator for TRM football, Baker will also coach running backs.