Man caught with 2.5 pounds of weed, too

A suspected drug trafficker from Virginia was arrested last week in Castleberry.

Chief Tracey Hawsey said William Orebaugh, 28, was first noticed after he allegedly made an illegal U-turn on Ala. Hwy. 31. 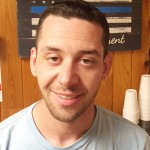 What was found inside the vehicle was one for the record books, Hawsey said.

“When I approached the vehicle, Mr. Orebaugh stuck his head out the window and asked if everything was OK,” Hawsey said. “I informed him that I had a drug dog that that I was about to perform a free-air search of the vehicle.”

K-9 Beni immediately alerted on the vehicle, and with the assistance of Officers William Mosely and Blayne Pruett, the discovery was made, Hawsey said.

Officers are working to seize the cash, as well as the vehicle, Hawsey said.

Orebaugh was charged with trafficking, two counts of possession of a controlled substance and possession of drug paraphernalia. He was later released on an unknown bond.