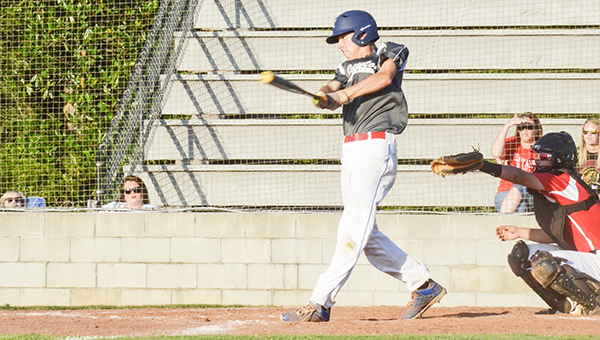 Corey Williams | The Brewton Standard
Dalton Shell gets a hit versus Covington County.

The Brewton Dawgs split games last week in a double header versus Covington County in East Brewton. Brewton lost game one 5-1, and rebounded back with a one sided 15-4 win in game two.

Runs were hard to come by for Brewton. Brewton had seven hits as a team off the bats of Malcolm Hawthorne, Joshua Winton, Russell Smith, Caleb Winton, Dalton Shell, P.J. Lovelace and O’Neil White. Shell scored the lone run.

Jacob Bondurant, Dylan Emmons, and Micah Flores combined on the mound for the Dawgs in the losing effort.

If runs were hard to come by in game one for Brewton, the team must have struck gold in game two.

Malcolm Hawthorne had a double, two RBIs and a run scored. Jacobey Hawthorne had a double for an RBI and three runs scored. Chris Jones was 1-for-1 with a double for an RBI and two runs scored. O’Neil White had a hit and scored two runs. Micah Flores was 1-for-1 with a single and sacrifice bunt. Dylan Emmons had an RBI hit and scored a run. Hunter Revel had an RBI single. Derrick Barton and Caleb Winton each scored two runs.

Russell Smith got the start and the win on the mound for the Dawgs. Revel and Flores came in the game for relief.