T.R. Miller catcher Hunter Brittain was selected out of a group of 108 players to the USA 18U 40-man roster this past weekend in Cary, N.C. 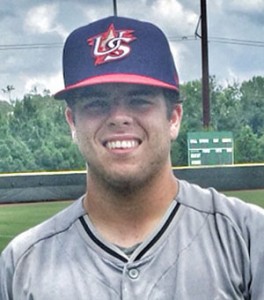 Courtesy photo
Brittain will travel to Texas in September to compete in the final trials of the 18U USA National Team.

Brittain will travel in September to Houston, Texas for an opportunity to play on the 20-man roster that will represent the United States in the COPABE Pan Am “AAA” Championships in Monterrey, Mexico from Sept. 23 to Oct. 2.

The group of 108 athletes were selected from the Tournament of Stars and was previously invited athletes from the 2015 USA Baseball 17U National Team Development Program and National Team Identification Series.

Brittain is one of four players representing Alabama at the upcoming trials with the others being Tanner Allen from Theodore; Tanner Burns from Decatur; and MJ Melendez from Montgomery.

Earlier last month, the Alabama Sports Writers Association named Brittain 3A First Team All State after he batted .425 with three homeruns and played solid defense behind the plate at catcher.