A Brewton man was arrested Monday after a “high risk takedown” in the Flomaton Hardee’s parking lot. 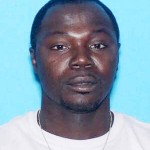 Emmitt Jones III, 34, of Pea Ridge Road, is charged with first-degree burglary and second-degree domestic violence after a joint operation with the Flomaton Police Department.

Jones was located at the Flomaton fast food restaurant and taken into custody after he sat in the rear seat of a vehicle with a pistol.

“Officers had previously received information that Jones was armed, so all precautions were taken to ensure officer and public safety,” said FPD Chief Brian Davis. “This was a great job of communication and working together between the two departments to arrest Jones and take a gun off of our streets.”

Jones, who is a convicted felon, is prohibited from possessing a firearm and is facing a charge in Flomaton for having one, Davis said.