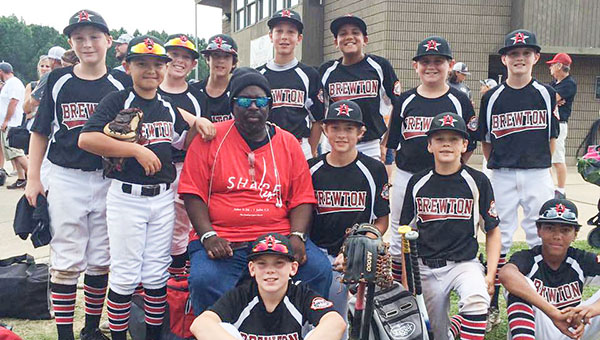 The Brewton 12U All-stars fell short 8-4 to Mathews Park in an elimination game on Monday at the state tournament in Alex City. Brewton lost to Spanish Fort in round one, before rebounding back against Sweetwater with a commanding 8-3 win.

The Brewton 12U Tigers fell 16-8 to Spanish Fort in six innings on Sunday despite racking up eight hits and eight runs.

Miller Hart had three RBIs on a homerun in the first inning for Brewton .

Parker Reimensnyder got the win in relief for Spanish Fort. Reimensnyder pitched one inning and allowed no runs.

Logan Brown was bonanza at the plate, hitting three home runs, good for eight RBIs to lead Spanish Fort to victory. Home runs also came from Aaron Threat in the first inning and Reimensnyder in the third inning.

In the top of the first, Spanish Fort grabbed the early lead, 4-0. A single by Hoover brought home Trey Fenderson. More runs came home after a two-run homerun by Threat.

Brewton quickly matched Spanish Fort’s strong inning with a six-run inning of their own in the first. Brewton scored on a three-run home run by Hart, an RBI single by Bracken Pettis, an RBI single by Ed Dolihite and an error.

Spanish Fort never surrendered the lead after the fourth inning, scoring on a three-run home run by Brown and a two-run single by Hoover.

Dolihite was  2-for-2 with an RBI. Trent Cooper was 1-for-2 with two runs scored.

Brewton and Sweetwater both threatened with rallies, but it was the Brewton who gained the upper hand in the 8-3 win.

Sweetwater had 10 hits compared with just seven for the Brewton but Sweetwater stranded six on base.

Kyle Blevins racked up two RBIs on two hits for Brewton. He homered in the fourth inning and singled in the sixth inning.

Jaxson Flores got the win on the mound for Brewton. Flores allowed three runs over six innings, struck out five, walked none and gave up 10 hits.

The bottom of the first saw Sweetwater take an early 2-0 lead.

Yet, the game was never in doubt after the third inning, as Brewton scored three runs on a three-run home run by Trent Cooper.

The Brewton Tigers 12U added two more runs in the top of the sixth. A single by Blevins ignited the offense, plating Brother Pierce. Nolan Atkinson followed up with a single to score Blevins.

Blevins and Logan Rowell were both 2-for-3 at the plate to lead Brewton.

Mathews Park responded in a big way in the third inning with six runs on two errors and two singles.

A two-run fifth inning helped bring Brewton within two runs. An RBI single by Hart and a fielder’s choice gave Brewton life. Mathews Park stopped the rally with a strikeout to end the inning.

Mathews Park responded with two runs in the bottom of the fifth, both courtesy of errors by Brewton.

Brewton was unable to get anything going at the top of the sixth inning.

Hart was 4-for-4 with an RBI and run scored to lead Brewton. Atkinson had a double and three RBIs. Ed Dolihite, Blevins, Jaxson Flores and Cooper had a hit.

Blevins suffered the loss on the mound. He pitched four innings, gave up six runs, two earned, on nine hits and three strikeouts.