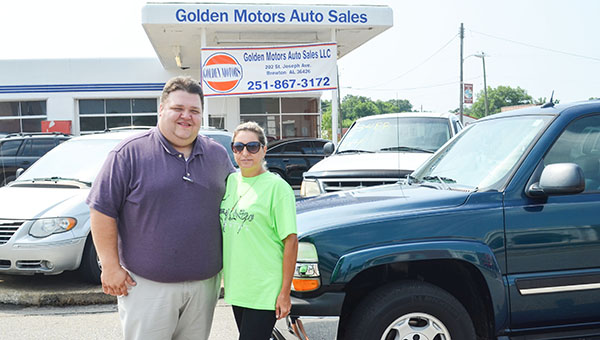 If there are two things Luke Golden knows, it’s cars and family – which is the exact reasons for opening his new venture, Golden Motors.

The “Golden Motors” name is also known in Brewton. Golden’s grandfather began the business in 1964.

From its new location in downtown Brewton, Golden said he plans to continue the family tradition of honesty and good deals.

“My grandfather took care of his people,” Golden said. “Everything I know, I learned from him, and that’s what we plan to do here at Golden Motors –take care of our customers.”

Golden said his selling approach is different than the one found at most dealerships.

“At Golden Motors, we’re not selling what’s right with the car,” he said. “We’re going to tell you everything that’s wrong with it, so there is nothing that is hidden at the end of the day. We want our customers to know upfront what they are buying, and this is the way to do it.”

Golden, who has spent nearly two decades in auto industry, said he decided to open his own business to spend more time with family.

“When you work six days a week at a business, it doesn’t leave much time for anything else,” he said. “I’ve been very fortunate to have this opportunity, and I plan to do my best at it.”

The lot features pre-owned vehicles for every budget, and while in house financing isn’t an option yet, Golden said his lot works with a number of different financers.

“And if there is something you’re looking for specifically, let me know and we can find it for you,” he said. “We deal in a lot of bank sell outs, liquidation sales and more. We cherry-pick our vehicles, so that’s how we can keep our prices affordable.”

A tentative grand opening is set for July 1, he said; however, business is on-going now.