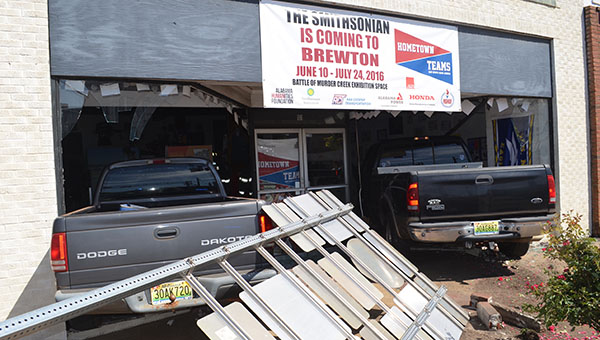 Corey Williams | The Brewton Standard
The trucks as they entered the building.

Thankfully, no one was injured when the Ford F250 and Dodge Dakota collided at the downtown intersection of Highway 41 and 31. The driver of the Ford, 78-year-old Russell Findley, and driver of the Dodge, 57-year-old Lawrence Bird, were checked and cleared onsite for injuries after the accident.

Sgt. Anthony Casey of the Brewton Police Department said despite the damage done, the result could have been much worse.

“No one was taken to the hospital,” Casey said, “which is not bad for two vehicles going through a building. Everyone was pretty lucky.”

Before the accident, Bird was travelling north on Hwy. 31 from Atmore en route to the Escambia County Courthouse for a marriage license. Allegedly, Findley was crossing the train tracks during a red light on Hwy. 41 when the two collided. From there, the momentum of the collision carried the two trucks into the front entrance of the museum.

Mozelle Williams, a driver turning left to travel south on Hwy. 31 who witnessed the crash, said she couldn’t believe what she saw.

“The (Ford) ran the red light,” Williams said. “When the trucks went into the building it was slow motion. Like they just glided in there. I said ‘What?’ I don’t know why the (Ford) was driving so fast with the light being red. I don’t know.”

No one was present in the crash area outside or in front of the Brewton Smithsonian Exhibit at the time. Staff worker at the museum Tristen Turner said he was on his way to work when the accident happened.

“I pulled up to the cops and everyone here,” Turner said. “I didn’t get a look at (the accident) when it all happened.

“I’m usually stationed in the middle of the building (when at work) to keep an eye on things and prevent any damage to the items,” he said. “Then this happens. Luckily no one was hurt.”

Brewton director of program management Connie Baggett said there was extensive damage to sports equipment items and displays in the front of the building but local items remained untouched for the most part.

“We’re still assessing damage but thankfully the local items escaped unscathed,” Baggett said. “We’re waiting to hear from the Smithsonian for further instructions on the next steps to take, but the front of the building is boarded up and the exhibit is open and running.”

The Brewton Smithsonian Exhibit is open Monday through Saturday at 10 a.m. to 5 p.m. through July 26.

Nalty to run for Brewton mayor