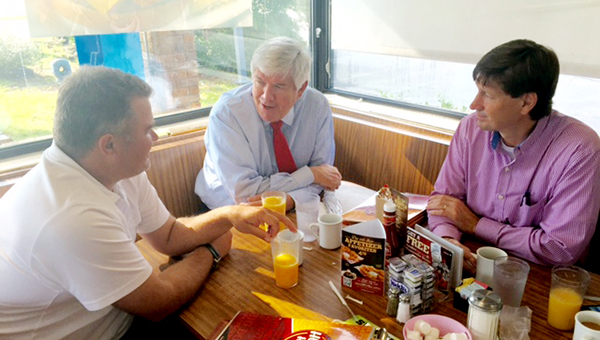 A new high-tech manufacturing company – Frontier Technologies – has selected Brewton as the location of its newest expansion bringing up to 25 jobs starting this fall.

The company is a new expansion for Frontier Manufacturing and Engineering Technologies Inc., a California-based manufacturer with an established relationship in Pensacola, Fla. The company manufactures aerospace, energy and architectural components.

The new Brewton facility will focus on light manufacturing and assembly of metal components used in GE wind turbines installed around the world. The company will also produce fabricated wood products alongside the metal fabrication.

Business records show the company was incorporated in 1994 in Gardena, Calif., and reports an annual revenue of between $5 to $10 million.

Mayor Yank Lovelace said the city is excited to house the company in its industrial park and will work to help the company grow.

“Frontier president Steven Hoekstra made a great choice in locating the manufacturing plant here, and we will work to help his company grow with us,” he said.

The project has been a joint effort between the city and Coastal Gateway Economic Development Alliance.

Hoekstra said the city’s aesthetics were “impressive,” the people “welcoming,” and local work ethic “outstanding.” The location near the company’s Pensacola customer made the choice an easy one for the new plant that represents an investment of more than $1.5 million, he said.

“We will start very soon, hiring about 10 locally and five coming from our California base to do building modifications,” he said. Welding position applicants will be tested on site in the coming weeks.

“The geography here was a great fit to serve Pensacola, you have great training programs here, a good work ethic versus the other places in the running, quality of life is great, schools were important and we have Longleaf Machining next door,” Hoekstra said Thursday at a meeting with Lovelace and Coastal Gateway Economic Development Alliance representative Will Ruzic.

Hoekstra said he looked for potential locations within 60 miles of the Pensacola plant, and Brewton came out on top. Hoekstra also said information regarding the wage range would be released in the coming weeks and interested, qualified workers could apply through the Alabama Career Center.

“We are more than excited to have this company here in our region,” Ruzic said. “Our region and Brewton in particular can compete with anywhere in the Southeast for high-tech companies with good-paying jobs. This is another example of how well the team effort is working.”