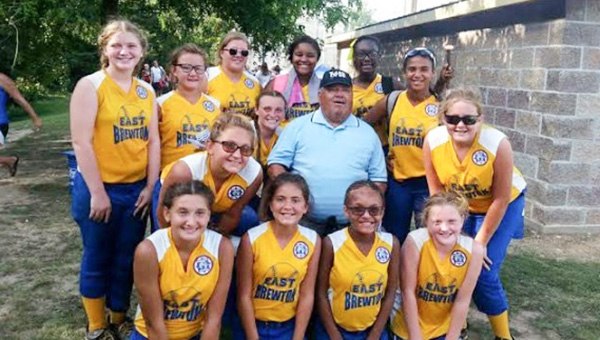 Courtesy photo
The 12U softball team snaps a picture with umpire Sam Gonzales after he gives them some great words of advice. Gonzales had been officiating for 54 years for basketball, baseball and served as a referee for Bear Bryant. The regional tournament was his last tournament.

The 12U Lady Eagles saw its season come to an end in Arkansas after losing to Tri-County, 10-5, in the second round of the Southwest Regional Babe Ruth Softball Tournament on Friday.

Head coach Doug Sims said he was very proud of how his team competed.

“This team has a lot of character, talent and ambition,” Sims said.

“We faced some great competition, and it was something we needed to see. I’m glad they got exposed to that kind of atmosphere. It was a life memorable experience for them and myself. Very, very proud of them.”

The Lady Eagles jumped ahead in the bottom of the second with two runs off a single by Madison Hawthorne and double by Ashli Wyatt.

The Antlers responded with a big third inning Kalem Belleck tripled to bring home three runs. The Antlers had six hits in the inning.

The Antlers added to its total with two runs in the fourth. East Brewton responded in the bottom of the inning with a run to make the score, 5-3.

The Antlers broke away with the game in the top of the sixth inning with four runs on two hits and a couple miscues by East Brewton.

Morgan Johnson of Tri-County doubled to centerfield to score two runs. Tri-County held East Brewton scoreless in the bottom of the inning to lead, 2-0.

Tri-County went on an offensive explosion in the second inning. A two RBI triple by Johnson, RBI double by Lauren Skoggs, and a couple of pass balls was good for seven runs.

East Brewton responded in the bottom of the inning when Nakasia Smith connected for an RBI single to score Kendall Carpenter who singled earlier in the inning. Later in the inning, Smith scored on an errant throw to first base to make the score 9-2 in favor of Tri-County.

Tri-County added another run in the third inning off a hit. Jailyn Bondurant led off the inning with a single for the Lady Eagles. Tri-County held off East Brewton from scoring after the lead off single.

After Ashli Wyatt struck out the side in the fourth inning, East Brewton looked to get things cooking on offense.

Harley Wilson led off with a hit. Later in the inning the Lady Eagles got the big hit off the bat of Madison White to score two runs. Tri-County led 10-4 at the end of the inning.

The Lady Eagles added a run in the fifth inning, but failed to score in the sixth.

Winner of the regional tournament was undefeated JPRD Eastbank, out of Louisiana.