Patrick D. Hendrieth has announced his intent to seek the office of Councilman District No. 4 for the City of Brewton.

Hendrieth said several citizens of the community approached him in January and asked if he would be interested in running for councilman. 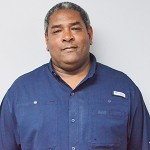 “This made me think that maybe the community is ready for change,” Hendrieth said.  “So here I am.”

Hendrieth, who is a Brewton native, said he has been back in Brewton for 11 years and has seen little change.

“The complaint I hear the most its there’s nothing for our kids to do, which is true because I have a teenager and a young adult always complaining about the lack of activities and entertainment,” Hendrieth said.

“Here it’s summer time and there’s not a public swimming pool in town other than the YMCA which the average family cannot afford,” he said. “There are several vacant buildings in town. Why not take one of them and make a nice arcade? If the arcade is successful we can build from its success like a blueprint and move forward with other projects to propel the growth of our town.”

Hendrieth said this would also create jobs for the youth in the city.

“The city would benefit and everyone wins, because parents don’t have to worry about their kids having to travel to other cities for entertainment,” he said. “It’s time to make our youth proud to call Brewton home.”

While Hendrieth’s primary focus will be District No. 4, he said he would do everything in his power to be a voice for all parents.

“If elected I promise not only the parents of District No. 4 but the parents of the entire city that I will do everything in my power to get some type of entertainment activity for our youth,” he said. “I won’t be able to do this alone. It’ll take parents attending council meetings, letting their voices be heard.”

For the citizens of District 4, Hendrieth said he has two questions.

“First, in the last eight years, what changes have you seen in the community other than a few Christmas lights on poles; flowers put at the intersection of Sowell and Grandberry; trees planted at Sportsman Park – which looks great – and a couple of yellow lines on Sowell, which needed to be paved before putting lines down?” he asked. “Note, all this was done this year except for Christmas lights. They were done at the end of last year. Why this year? Because it’s an election year.

“If your answer to question one was nothing has changed, then my second question is why would you want four more years of nothing?” he asked.

Hendrieth and his wife, Natalie, have been married for 18 years. Together, they have four kids, Ray, Shundrece, Taylor and Mark.