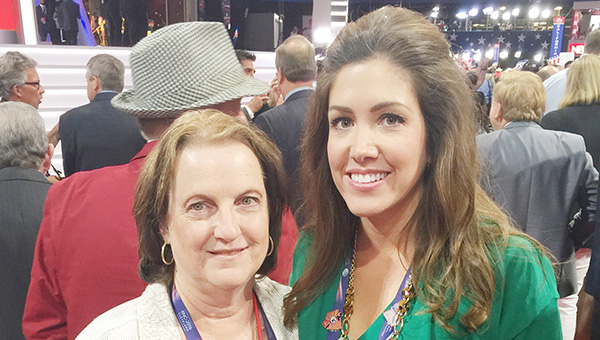 “The convention has been called the ‘Super Bowl of Politics’ for good reason,” said Long, of the four-day event.

The convention hosted approximately 2,470 delegates and 2,302 alternate delegates from all 50 states, the District of Columbia and five territories. It ended Thursday with the Republican party choosing Donald Trump as its nominee for President of the United States and Mike Pence as vice president.

“It was an amazing opportunity to represent the state of Alabama and get to know other delegates from across the United States,” she said.

“The atmosphere inside the Quicken Loans Arena each night was electric, as we all watched average Americans and our elected leaders tell us why the Republican Party and Trump will help Make America Great Again.

“I enjoyed spending time with Jackie and Jimmy Gay,” she said.

“Jackie is a fantastic representative from Escambia County and made us all proud.  I hope to return to the convention in four years as we work to re-elect Donald Trump President.”

Long is a 1998 T.R. Miller graduate and a 2002 Auburn graduate. She attended law school at the University of Alabama and has been practicing in Birmingham at Baker Donelson since 2007, where she is also a shareholder in the financial services department and is the chair of the firm’s recruiting committee.

A former Miss Alabama, Long represented the state at the 2004 Miss America Pageant and was the winner of the national community service award for her work with First Vote: America’s Freedom to Choose, a non-partisan civic education program designed to increase political awareness among young adults sponsored by the Close Up Foundation.

Long earned her spot at the convention after running as an at-large statewide delegate for Trump in place No. 10 in October 2015. She was uncontested on the ballot in March.

Gay is also no stranger to politics. As part of the Escambia County Republican Committee, Gay helps to coordinate support on the local front – a venture that earned her an alternate delegate spot at the RNC Convention.

“It was an opportunity I will always treasure,” Gay said.

“I was honored to represent Alabama and to be a part of this great movement in history. There was a line up of great speakers and Thursday evening’s ceremonies topped off a great week. The moment was unforgettable and electrifying as we celebrated our nominees for President and Vice President.”

Gay said she and husband, Jim, were welcomed in Cleveland, “everywhere we went.”

“I felt as though I left a part of my heart there – a beautiful city with beautiful people,” she said.

-“Last week was an unforgettable experience of my life and I am so thankful to have been a small part of the RNC Convention.”