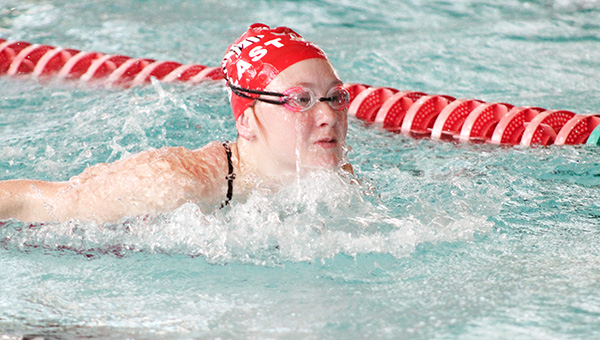 The Tigersharks had a banner weekend winning high point awards in the girls and boys age groups, as well as swimmers who medaled and ribboned in many other events, taking home third place overall out of nine teams participating in the meet. The Tigersharks, were the smallest team entered in the meet.

One of the big highlights this weekend for the Tigersharks was by swimmer Kinsley Byrd, daughter of Dylan and Beverly Byrd, who trophied as a High Point winner in the 10 girls age group. Byrd, who recently turned 10 years old, was one of the youngest in her age group, at the meet. 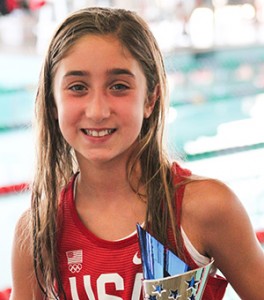 “(Byrd) has a focus well beyond her years,” said swim coach Angel Boyd. “Her drive is like no other I have seen. She medaled in each of her individual events. She is a very coachable child, and a highly talented breaststroker.”

Cole Jernigan, son of Lee and Felicia Jernigan had an amazing meet winning all five of his individual events, five 1st place medals and the overall high point trophy for 14 year old boys. “Cole (Jernigan) is a determined, hardworking young man who has a bright future in the sport of swimming,” said Boyd.

“(Morris) is a pure freestyler who has really come into his own the past few months swimming consistently under 25 seconds in 50 freestyle,” Boyd said. “Each time he steps up to the blocks, and under 56 seconds in the 100 yard freestyle.”

Morris medaled in each individual he swam this weekend and finished 4th overall in the 15-18 male age group.

Caleb Kent, son of Danny and Phyllis Kent, had a great meet as well. Kent, who is a young 12 year old in the 12-year-old age group swam an amazing meet, winning a high point trophy and helping to rack up some big points and some great times for the team.

Kent was also was the lead off on the award winning 14u boys relay free team and Fly in the winning medley relay team. He medaled in each of his five individual events this weekend as well.

“(Thelen) has worked hard and his hard work paid off in a big way this weekend,” said Boyd. “He is a swimmer who began last fall and has worked his way up the ladder, I am very proud of his efforts.” Jacob Thelen was also a member of the award winning 14U boys 200 freestyle and medley relay teams. He earned medals and several ribbons during the championship weekend.

His brother, 14-year-old Dean, had a big day as well after also his way to two award winning relays, and several standout personal best swims.

“He is a polite and hardworking young man with lots of determination and drive.” 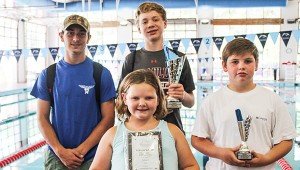 Newcommer Allie Morgan, daughter of Kristen and Dr. Aaron Morgan, had a great showing this weekend as well, earning had a several personal best swims winning ribbons in her events.

“(Morgan) is a pleasure to coach and adds a real zest of life to the team,” Boyd said.

Matthew Kirkland, son of Jeff and Heather Kirkland, only swam one day of the meet, but he scored some major points for the team, winning medals and swimming on the 14U winning medley relay team.

“Matthew (Kirkland) is a joy to coach,” Boyd said.

Sara Scott, daughter of Doug and Sheila Scott, had a whale of weekend in a competitive 13 year-old girls’ age group.

Scott swam personal best times in almost every event she entered and medaled in several events. She ended up placing 4th overall in her respective age group.

“Sara (Kirkland) is a hard worker, who gives me great pride to coach.” Boyd said.

The Tigersharks are currently registering for the fall session.