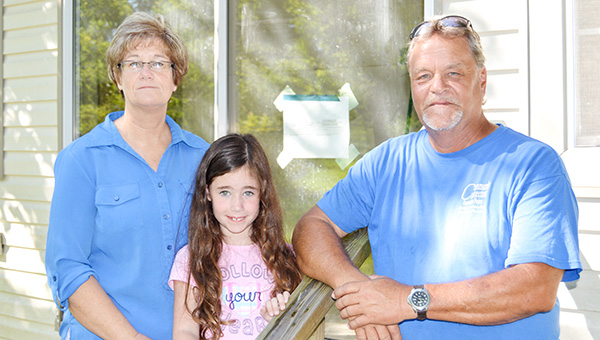 Stephanie Nelson | The Brewton Standard
The Garrett family – Chuck, Marcia and their 7-year-old granddaughter, Kenslee – are one of two families who received a new home through New Beginnings Sunday

It is all about new beginnings.

The Garrett family – Chuck, Marcia and their 7-year-old granddaughter, Kenslee – were a family in desperate need of one. Over the years, the couple had gone from being financially independent to now living in a travel trailer tucked back on the far side of the New Beginnings Worship Center’s property.

When the family sought help for a loved one battling drugs, it led them to the Brewton church known for helping not only those fighting drug addiction but also those with a deep love of God in their hearts.

The Garrett family is a solid representation of everything the local ministry preaches, and on Sunday, the church presented the family with a new home.

“It’s a blessing,” Chuck said of the four-bedroom, one bath home on St. Nicholas Avenue. “It’s ours, and no one can take it away from us. It’s a place where we can make a home and not have to worry about what’s happening right down the street.”

Marcia said local home rentals were out of the family’s financial means, but that they were content to wait for God’s plan to show itself.

Minister Bo Bell said when he heard of the family’s plight, he knew what needed to be done.

“I know what it feels like to be homeless,” Bell said speaking of his well-known history of drug abuse, recovery and how he was led to begin New Beginnings Worship Center and its outreach programs.

“When I go to bed, I can’t wait to wake up and see what God’s got planned. He has found a way for me to help others find a home, and I have to give Him the glory for providing.”

The Garrett home is the second obtained by the church. The first, located on Forest Avenue in East Brewton, was also given to a deserving family – Josh, Emily and Kayleigh Lands – Sunday. That family’s story is a near mirror to that of the Garrett family.

Bell said the homes were donated to the ministry by various means. The Lands home was donated in memory of the owner’s late father who hoped it would be restored and given to a family in need, while the Garrett home was given by an organization whom wished to remain anonymous.

Bell said word of the ministry’s outreach programs of remodeling homes and adopt-a-block projects were the reason for the donations.

“A few years ago, I went to the home in East Brewton to provide ministry for a teen known to be living in the area,” Bell said. “The house was empty, but we prayed right there, behind it. We asked for the Lord to provide a place for that kid to live.

We prayed Psalms 84 that said ‘How lovely is your dwelling place, Lord Almighty; Blessed are those who dwell in your house.’

“The next day, we got a call that said the family said it was laid on their heart to give us that house,” he said. “It was just amazing.

“What we were able to do Sunday is the embodiment of what our ministry is about,” he said. “There are so many families in need in our city.”

As for the Garrett family, they hope to be in their newly remodeled home by Christmas. In fact, Kenslee has her bubblegum pink paint picked out and sitting in the middle of her bedroom floor.

“I’m hoping for three things,” she said, “a pool, a puppy and a playhouse.”

Standing in front of the home Monday, her grandparents had one last thing to say.

“This right here, it’s proof in the power of prayer,” Marcia said.

It appears the New Beginnings’ rehoming trend is, well, just beginning Bell said. Others throughout Brewton and East Brewton have contacted the ministry about taking ownership of other homes.

Bell said once the official paperwork is done, the ministry will begin placing other families in the homes.

“It’s just when God gives it to us, we give it back,” Bell said of the practice. “That’s just how it is.”