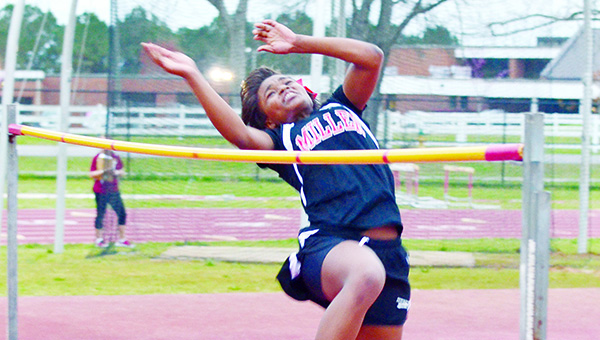 Recent T.R. Miller graduate Mykayla Harrison will hurdle to the college level after signing her letter of intent with the University of Montevallo for track and field this past week.

T.R. Miller head track coach Eddie Brundidge said the sky is the limit for Harrison. “(Harrison) has been a joy to be around and coach,” Brundidge said. “She has a lot of undeveloped potential. I think she’ll do very well at the next level with better coaching and being able to specialize.”

While at Miller Harrison was a standout athlete who lettered in volleyball, basketball and track.

This past spring she was awarded as captain in volleyball, best defensive player in basketball; and co-most valuable player and girl’s most valuable field event athlete in track and field.

In state competition for track she placed second in the high jump and 100 meter hurdles; third place in the triple jump and fifth place in the 100-meter dash. The TRM girl’s team went on to claim the 3A state championship title.

“She really put on a show at the state meet,” Brundidge said. “She showed a lot of toughness and determination running the 100 (meter) hurdles, 100 meter (dash) and triple jump all in the same hour. She set a personal record in all three events.”

Harrison said she was drawn to attend a Division I school and initially was content to attend school and not do any sport.

“I looked at a bunch of different colleges to go to,” Harrison said. “One day (Montevallo track) coach (Tommy) Barksdale called me and told me to come visit the school. I went. They offered me a track scholarship and I took it.

Harrison said she will do the high jump in college, but looks forward to improve her hurdle time as well.

Harrison’s father, Barayl Ballard said Montevallo is a great school for his daughter to succeed in not just athletically but in the classroom as well.

“I think a smaller environment will play a major part in her success,” Ballard said. “She’s worked hard and she’s earned this opportunity. I’m proud of her. Main thing is to stay focus on education and enjoy the experience. This is an opportunity of a lifetime. A lot of people don’t get that opportunity so take full advantage of it and enjoy it.”

Ballard said him his daughter visited Montevallo about six years ago for a piano audition.

“While we were waiting on the judges we were looking outside the door over the campus and I was like, ‘What do you think about going to school here?’ At the time she wasn’t really thinking about school or anything, but here we are a couple years later standing in that same spot and she’s actually going to school there.”

She plans to study physical education or kinesiology at Montevallo.

Harrison is the daughter of Barayl and Letha Mallard.