Ending with a swish 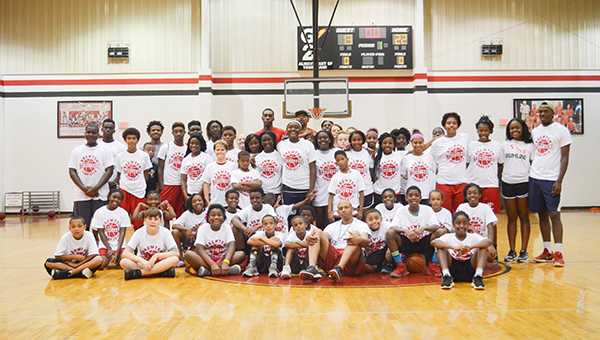 Corey Williams | The Brewton Standard
Campers assemble at center court on the last day of basketball camp held at the T.R. Miller gymnasium. The two month camp was sponsored by the City of Brewton free of charge to all participants.

The City of Brewton Basketball Camp ended its summer run this past week. For the past two months, camp goers honed their skills on the hardwood and learned what it takes to be successful on the court as a team player.

“I learned discipline on how to pass the ball and not to be a ball hog,” said 12-year-old Payton Rowell.

“I learned how to get along with people and that (basketball) is just a game. It’s not the end of the world. I’m really competitive. I get mad when I lose. I think I’ve gotten better at not getting so mad.”

Ten-year-old Serenity Mitchell, who’s favorite basketball player is Steph Curry, said she has gotten better on both offense and defense with the drills she has learned at the camp.

One of the coaches heading the camp was T.R. Miller girls’ basketball coach Ron Jackson. Jackson said this summer was the most successful the camp has ever been since it originated over three years ago.

“The camp went great this year,” Jackson said. “We had more numbers this year than we ever had. We had as high as 88 kids here. On average we had about 64 kids per day so the camp went really well. The kids love it. We love it. That’s what it’s all about.”

The camp ran six weeks. Coach Jackson said he’ll like to thank the City of Brewton for its support of basketball in the community.

“All the shirts, snacks, assistants and all who worked were paid for by the City of Brewton,” Jackson said. “Myself, all the coaches and the kids really appreciate the city for getting behind us with this camp. It’s been a great experience this summer.”